BERLIN – Perhaps the biggest high school basketball matchup of the season certainly lived up to the hype on Tuesday as the Stephen Decatur boys’ varsity team pulled away from Bayside South and Worcester County rival Pocomoke in an emotionally charged game in front of a packed house.

It was standing room only at Decatur on Tuesday with the Worcester County fire marshal in the building counting heads, which started arriving shortly after school closed hours before the highly anticipated contest between the two Bayside South heavyweights. Pocomoke had beaten the Seahawks in the first meeting back in late December, but the Seahawks got a shot at revenge and an opportunity to tie the Warriors in the conference standings on Tuesday.

By the time the national anthem and the pre-game introductions were over, the intensity in the gym reached a fever pitch as the standing-room-only crowd filled the bleachers and lined the sides of the court on both ends. Pocomoke got off to a fast start and led 6-0 about halfway through the first quarter. A reverse layup by Decatur’s Keyon Eley got the Seahawks on the board with a reverse layup at the 3:30 mark and a three-pointer by Darian McKenzie with under two minutes remaining gave Decatur its first lead at 10-9. Pocomoke scored on a buzzer beater at the end of the first quarter to take a 12-9 lead. 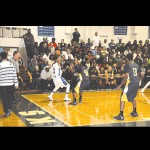 Decatur’s Keyon Eley works the ball from the corner during the second quarter of the big game against Pocomoke on Tuesday. Eley scored 20 points in the big Bayside South contest. Photo by Shawn Soper

The second quarter was all Decatur as the Seahawks went on a monster run, fueled by the raucous home crowd, to pull away from the Warriors. Kevon Voyles scored on the Seahawks’ first possession to tie the game and a jumper by Torrey Brittingham put Decatur on top for good at 14-12 just a minute into the second. Voyles assisted Eley with 6:45 remaining to put Decatur ahead, 16-12. On the Seahawks’ next possession, Brittingham fired a lazer from beyond half court to Eley under the basket and Eley converted the layup to put Decatur ahead 18-12 and extend the run to eight straight points as the crowd went wild. Decatur continued the run throughout the period, punctuated by a big dunk by Keve Aluma, which brought the home crowd to its feet. After a steal and a layup by Brittingham at the 5:02 mark, the Decatur run had reached 15-0 as the Seahawks extended their lead to 24-12.

After a frantic stretch of the second quarter, Pocomoke got on the board with just under five minutes remaining in the half to stop the bleeding. The Warriors turned up the defense and the Seahawks cooled off as Pocomoke cut the lead to 29-18 at the half. While Decatur had dominated the quarter, Poco-moke sustained the run and cut the lead to 11 at the intermission, and the big crowd sensed the game was far from over.

At the start of the third quarter, Aluma got a big dunk with just over seven minutes remaining to push the lead to 31-18. Ja’Quan Johnson scor-ed on a hard drive to the basket and followed that big play with a long three-pointer to extend Decatur’s lead to 39-25 with just under four minutes remaining in the third. A running jumper by Eley extended the lead to 41-26, but Pocomoke nailed a long three-pointer to cut the lead to 41-29 with a lot of time left in the third.

Aluma scored a fast-break layup after a steal to extend the lead to 43-28, but again, Pocomoke answered with a three-pointer to cut the lead to 43-31 with under two minutes remaining in the period. Pocomoke cut the deficit to under 10 points at 45-37 with 33 seconds remaining, but Eley made a layup at the buzzer to push the Seahawks’ lead back to 11 points at 48-37 at the end of three and nobody in the record crowd was going anywhere.

In the fourth, a layup by Eley followed by a big three-pointer from Voyles pushed the Decatur lead back to 54-38. When Voyles broke away for a layup with just four minutes remaining in the game to extend the lead to 56-38, the big crowd sensed the Seahawks were starting to pull away from the Warriors.

Pocomoke would not quit, however, and a three-pointer with just over three minutes remaining cut the lead to 57-41. A runner by Eley about a minute later extended the Seahawk lead to 60-45, and time was trickling away for the Warriors. Pocomoke began fouling the Seahawks down the final stretch, but Decatur knocked down enough of their free throws to keep the Warriors at bay and pulled away for the 68-47 win.

The big win by Decatur left both teams with just one conference loss, each having beat the other on their home courts. With a handful of regular-season games remaining, both Decatur and Pocomoke will likely win out, setting up a possible coin toss to settle the Bayside South championship.