BERLIN – A new program in Berlin is designed to recognize town employees for the years of service they’ve given the municipality.

On March 27, the town hosted its first-ever Service Awards Recognition Day. Nine employees — three of whom have worked for the town for more than three decades — and two Berlin Town Council members were honored.

“We know what makes Berlin Berlin is the town’s employees,” Mayor Gee Williams said. “The team we have today is better than we’ve ever had.”

Jeff Fleetwood, Berlin’s director of human resources, said the ceremony was something he had wanted to do for several years after seeing the number of employees who had worked for the town for many years.

“The plan is to keep this going for the future,” he said. “Employees truly enjoyed this and that is a great thing.”

Each municipal employee who had worked for the town for more than five consecutive years received a certificate from the mayor Friday and enjoyed a reception in town hall.

“We’re so glad we’re able to take this time to celebrate,” Williams said. “We’re happy to recognize all of you for making us proud.”

Williams said the daily efforts of the town’s employees were what enabled Berlin to function at the level it did.

“It’s all the things you do every day,” he said.

Three employees earned special attention, as their combined years of service came to 113. Williams thanked Bernita Downing, who works in the town’s police department, for the friendly demeanor and positive attitude she had shown during her 33 years of service. He praised the unassuming manner of Wendell Purnell, Berlin’s superintendent of public works.

The final employee to be recognized was Geneva Peters, the utility billing supervisor who has been with the town 41 years. 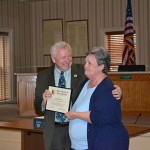 “If there’s a glue that holds the utilities together, it’s Geneva,” Williams said.

Councilmembers Elroy Brittingham and Dean Burrell were also honored during Friday’s ceremony. Brittingham has served on the town council for 25 years. Burrell has served for 20 years.