BERLIN – An apartment complex proposed for Seahawk Road is expected to move forward following the town council’s approval of the annexation of 90 acres of farm land into Berlin.

After hearing from residents both for and against the project, members of Berlin’s town council voted 3-2 Monday to approve the annexation of 90 acres just south of the former Harley Davidson building. Mayor Gee Williams said developments like the one proposed for this site would help fund the town’s infrastructure improvements.

“I’m worried that if we don’t start accommodating them we’ll be forced to raise taxes,” he said.

Developer Blair Rinnier plans to build nearly 800 “garden-style” rental apartments on the site. The first phase will consist of 144 units that could be complete in about a year. Additional units would follow based on demand.

“One of the things Berlin needs is quality housing at reasonable prices,” he said.

He said that while rental rates at his apartments would be affordable, the units would not be subsidized housing.

Rinnier said his family had been in the development business for more than 40 years and had never sold a community it built. He 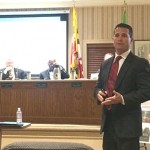 added that the Seahawk Road project would bring a number of benefits to the town of Berlin, starting with the widening of Seahawk Road and the donation of land near Flower Street for a park.

The development will also have a substantial financial impact on the town. Rinnier said the first phase of the project would generate $2.3 million in impact and EDU fees. The entire project is expected to bring the town $12.5 million, which Rinnier pointed out would nearly cover the $15 million in sewer debt the town has accumulated.

During Monday’s public hearing, several residents had questions on what the development would mean to the already busy Seahawk Road. Patricia Dufendach, a member of the town’s pedestrian safety committee, asked if the developer would be installing sidewalks. Though he assured her that he would, she pointed out that they wouldn’t extend beyond the community.

“So it’s not really joined to downtown Berlin,” she said.

She added that pedestrian safety for the children crossing Seahawk Road, which will be widened to four lanes with the project, was also something that needed to be considered.

In response to questions about the impact the development would have on Flower Street, Mark Cropper, Rinnier’s attorney, said the entrance to the apartments was only accessible to cars turning left, coming from Route 50. Upon leaving, cars are forced to turn right onto Seahawk.

“It forces all the traffic to Route 50,” Cropper said.

Some citizens expressed concern that the town was moving ahead with the annexation too quickly.

“I’m a little nervous we may be rushing into something the community hasn’t had a chance to digest,” resident Steve Farr said. “It’s a lot to swallow.”

Councilman Thom Gulyas questioned whether the apartment complex would have on-site management. Rinnier said that it would during the hours of 8:30 a.m. to 6 p.m. and that someone would be on call after that.

Councilman Elroy Brittingham asked Rinnier whether he would seek subsidies if his first phase of apartments didn’t fill. Rinnier assured him he would not.

“I won’t build any more until I lease the phase I have built,” he said.

While that satisfied Brittingham, Councilmember Lisa Hall said she had several problems with the project. She said she’d supported it when it had entailed a residential portion fronted by a commercial portion. With redevelopment of the former Harley Davidson building removed from the project, however, she said it was simply apartments in a cornfield. She criticized the way motorists leaving the apartments would be pushed toward Route 50, which in the summer is filled with traffic, and would have to go out to the highway to travel to the downtown area. She agreed with Rinnier’s assertion that the town needed affordable housing but said there were better locations for it.

“They’re asking for low-income rentals but they’re not asking for them in a cornfield on Seahawk Road,” she said.

The mayor replied that while there was some infill space closer to the downtown area its development wouldn’t benefit the town financially the way this project would.

“Where’s the money going to come from?” he said. “We have to find that balance.”

Gabe Purnell, a resident of nearby Mary Road, said he thought Rinnier’s development would benefit the town and ease the tax burden on citizens.

“I say we need to seize the opportunity,” he said. “I don’t want to see my taxes go up.”

Purnell said he was initially opposed to the project but after learning that school board members weren’t alarmed began to reconsider. He pointed out that after seeking Budget Travel’s America’s Coolest Small Town honor, the town had to expect more people would want to become residents of it.

“If we say no to this project, what are we going to say yes to?” he said, adding that Rinnier had been open to hearing questions and concerns from area residents. “He’ll meet with anybody at any time. I’ve seen developers who wouldn’t give you the time of day.”

“I can’t ask for a better group to come to town,” Purnell said. “This group’s got a proven track record.”

Purnell, Brittingham and Burrell voted in favor of the annexation.