Franchot, who started his Nov. 21 tour at the town’s visitor’s center, offered town leaders a proclamation recognizing the town’s ongoing effort to maintain its commercial and residential districts before embarking on an excursion down Main Street.

Williams took the opportunity to tell Franchot how the town had made the most of its commercial space and about the excursion train he was hoping to see come through the area.

“We’ve invested every dime we can into economic development, “Williams said.

Franchot’s first stop Friday was Uptown Antiques, where owner Bill Outten was quick to expound on his desire to see Berlin become the antique capital of the Eastern Shore. Franchot applauded his efforts.

“I think this antique sector is potentially a great opportunity,” he said.

From the antique store, Franchot headed north to A Little Bit Sheepish, where he purchased some knitting basics for his wife. He 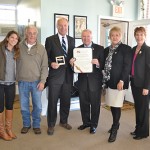 reminded his entourage of local officials that the state would be pushing a “shop local” initiative heading into the holiday season.

Down the street at Tada, co-owner Patricia Falck told Franchot how her expansive gift shop had started as a small business in her husband’s office nearly two decades ago.

“I opened the shop not even dreaming I’d be here 18 years later,” she said, adding that the shop had moved to Main Street five years ago and was now run by her daughter, Blair.

When Franchot asked her what made Berlin such an ideal town for businesses, Falck said it was the willingness of the merchants to work together. She described her experiences in another small town.

“It was dog eat dog,” she said, adding that in Berlin merchants were so cooperative they try not to duplicate merchandise. “It’s truly America’s coolest small town.”

Williams said officials were honored to have Franchot, one of the most influential elected officials in the state, take an interest in Berlin. He said the comptroller could share Berlin’s success story with municipalities throughout Maryland.

“What we’re doing is not magic,” Williams said.

The mayor added that the town’s revitalization work and efforts to attract new businesses could be replicated in other municipalities.

“You have to not be afraid to fail in order to get to the next success,” he said.