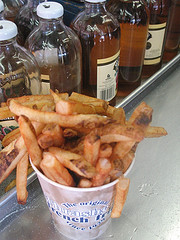 Sleeping on sheets the first night after a wash Vanilla Creme Brulee Crushed ice out of a refrigerator Leftovers for lunch the day after A breeze on a hot day A pork chop cooked on the grill How Erik Bedard pitches Little kids in Crocs M.R. Ducks on a summer afternoon No line for the… Read more »

BERLIN – Berlin needs more sidewalks, the Berlin Town Council concluded during a discussion of a resident’s request to split the cost of a new sidewalk at his home.“I think we definitely need to be encouraging homeowners to put in sidewalks,” said Council Vice President Gee Williams. “I think it’s a benefit to the town.”Williams… Read more »

OCEAN CITY – Two local men were arrested this week in connection with the burglary and theft that occurred at Buck’s Store in Berlin on Tuesday. Jeffrey Thomas Petronek of West Ocean City and Norman Kirk Scott of Berlin were charged with second-degree burglary, theft over $500, theft under $500 and conspiracy to commit theft… Read more »

SNOW HILL – A Finksburg, Md. juvenile, charged as an adult for his part in a pair of armed robberies in the resort in April, pleaded guilty last week to attempted armed robbery and was sentenced to eight years in jail, all of which was suspended but 18 months.Andrew William Hyle, Jr., 16, of Finksburg,… Read more »

BERLIN – Not many people ever see the piping plovers on Assateague Island, but with numbers increasing, visitors may get a glimpse of the threatened shore bird in the future.Maryland’s piping plover population on Assateague Island has nearly quadrupled since the birds were first protected in 1986, from 17 breeding pairs to 64 in 2006.North… Read more »

OCEAN CITY – The tax differential discussion resurfaced at Tuesday’s work session of the Mayor and Council, resulting in the agreement once again that Ocean City be compensated for the duplicated services that it provides.Tax differential is the money a municipality spends on a service that the county will not then have to provide. In… Read more »

BERLIN – Maryland Gov. Martin O’Malley, on his way to the annual Maryland Association of Counties (MaCo) convention in Ocean City this week, made a pit-stop at the Chesapeake Bay Farm market on Wednesday for a late afternoon dish of locally made ice cream and an open and frank discussion on agricultural issues.O’Malley, along with… Read more »