BERLIN– Two of Assateague Island’s wild horses took an unsanctioned trip to the mainland Wednesday before being returned to their herd on the beach.

While it’s a rare occurrence, two of the wild horses that make their home at Assateague Island National Seashore crossed the Route 611 Verrazano Bridge to the mainland Wednesday afternoon. Staff from both Assateague’s state and national parks were able to corral the animals safely before they were returned to the island by horse trailer. National Park Service officials said the horses’ foray across the bridge was caused by people crowding them.

“These two wild horses were in an already excited and agitated state and subsequently became blocked by visitors and vehicles,” a release from the National Park Service reads. “With their path of retreat towards the island cut off, the horses fled west over the bridge to the mainland.”

According to officials, a witness told park staff that the horses were agitated at the base of the east side of the bridge and fled over it when vehicles and visitors blocked their path east. The entire causeway east of the bridge is a “No Stopping, No Parking” zone.

“This incident is a very unusual and very uncommon occurrence,” the National Park Service release reads. “For reasons not entirely known, wild horses have been known to cross the bridge during one prior occasion decades ago.  While this incident is concerning, the circumstances that led to these wild horse’s flight across the bridge yesterday is more serious. The crowding of these animals by visitors and vehicles thereby blocking their movements and path of retreat directly led to this incident.”

Staff from the park were able to safely round up the two horses—the stallion Adrianna’s Happy Camper and the yearling filly Starlight—about a half mile west of the bridge. With the help of a local farm owner, the two horses were loaded onto a trailer and returned to the OSV section of Assateague Island National Seashore. Though the horses had never been trailered before, park staff had little trouble getting them loaded up. They simply removed one corral panel at a time until the horses’ enclosure abutted the trailer. Eventually, the horses stepped right on. 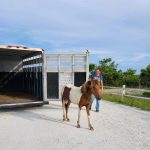 Starlight is pictured after being returned to the beach area.

Park officials are using Wednesday’s unusual incident to remind visitors that the horses are wild animals and that people should not be within 40 feet of them.

“Stopping and getting out of your car on the causeway to view horses is illegal,” the park’s release states. “Stopping on the causeway leads directly to an unsafe situation for other vehicles, bicycles, and pedestrians, for horses and for park personnel.”

Officials are encouraging people to use common sense when they’re at the park, as visitors are kicked, bitten and knocked down every year as a result of getting close to the wild horses.