OCEAN CITY – Popular high-quality cabin manufacturer, Great Outdoor Cottages, has begun the construction of a state-of-the-art facility in the Georgetown, Del., Business Park to keep up with a large increase in demand.  Founded by Ocean City, Maryland-based outdoor hospitality specialist Blue Water, along with Mike Scheid and John Longino, Great Outdoor Cottages currently has over 60 employees and a management team with over 185 years of combined experience in park model construction.

Great Outdoor Cottages will be moving from its temporary facility in Millsboro, Del., to the new factory as soon as construction has been completed. While the current facility proved to be adequate for producing the companies’ initial units, sales had to be cut off at 171 units due to overwhelming demand and production space limitations. Of those units, 35 have already been completed and delivered, with the first ones delivered to a third-party campground in North Carolina in January 2022.

The new manufacturing facility will be constructed in partnership with the Sussex County Government with a final size of 50,000 square feet. It will be dedicated to constructing cottages and will serve areas east of the Mississippi from Maine to Georgia. The cottages themselves will be constructed using top-of-the-line building materials and technology to ensure they are great investments for the properties that purchase them. The cottages will be able to sleep six people comfortably and will include plenty of storage, a full kitchen, a walk-in shower along with a full bathroom, and a back porch.

“Our motto is to build the nicest and strongest park models in the industry,” said Todd Burbage, CEO of Blue Water and lead investor of Great Outdoor Cottages. “This means we won’t cut corners while using innovative building techniques to create great cottages with cool space-saving amenities and exciting features.”

SALISBURY – David Mayonado, chairman of the Board of Directors of the Chesapeake Housing Mission (CHM), has announced Michael Franklin as its new executive director to lead the continued growth of the nonprofit organization moving forward. Don Taylor, founder and executive director for the past 13 years, asked to step back from the day-to-day operation to focus on starting similar nonprofits in the surrounding counties. Don will hold the title of director of development and sits on the Advisory Board of Directors. 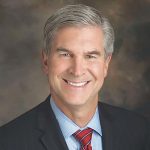 Chesapeake Housing Mission serves low-income families in Dorchester, Somerset, Wicomico, and Worcester counties by providing critical home repairs and the construction of wheelchair ramps for those who are unable to pay for them. CHM partners with volunteer teams from local organizations, businesses, and churches, giving them the opportunity to give back.

According to Don Taylor, “Michael’s background in healthcare will provide the organization with significant expertise in CHM demonstrating how their work generates health care savings for their clients and the organizations that treat them. Expanding the Healthy Homes Initiative will be a top priority.”

As the CHM’s new executive director, Franklin will work directly with the CHM chairman and Board of Directors to recommend and implement policies adopted by the Board for the effective operation and growth of the organization. He’ll also work with donors, agencies, clients and volunteers to help meet the needs of the community and assign resources to projects.

“Accepting this important role in our community is a result of seeing the need for improving the healthiness of homes in our region over the past several years,” Franklin said.  “As a society and a community, we underestimate the importance of the condition of the home on the health of individuals, particularly the elderly.  CHM has created a unique organization that is changing the lives of people.”

SALISBURY – TidalHealth is pleased to announce that Gopal Kowdley, MD, PhD, has been appointed medical director of TidalHealth’s General Surgery Residency Program, which the health system hopes to receive accreditation for in the fall.

Kowdley comes from St. Agnes Hospital in Baltimore, Md., where he was the program director of general surgery and served as the chief medical information officer and chairman of the Robotics Committee. He was previously responsible for training residents and medical students, and has a special interest in breast surgery, thyroid and parathyroid surgery, while using minimally invasive techniques.

Kowdley attended Johns Hopkins University for his bachelor’s degree in pre-med, graduating with honors in economics and biology. He earned his medical degree and PhD in biophysics at the University of Virginia School of Medicine in Charlottesville, Va., while involved in the Medical Scientist Training Program. He has authored many publications and abstracts.

Kowdley completed his residency at the University of Chicago Hospitals in Chicago, Ill., where he was chief resident of general surgery for five years before serving in the U.S. Army as the chief of general surgery and commander of the 67th Forward Surgical Team at Wuerzburg Army Hospital in Germany.

BERLIN – Mortgage rates have been climbing recently and are reaching levels not seen since 2011, according to the Coastal Association of REALTORS (CAR). As rates go up, the organization says it would expect to see a cooling off of the market but because of low inventory and an urgency to get into a home before rates get any higher, March continued to be a very strong month.

The most notable change this month was the Median Cumulative Days on Market (CDOM) which had been slowly going up for the last eight months, dropped significantly from 17 days in February to eight days in March. Buyers are not waiting to decide on a property. The CDOM is down 33.3% from March 2021 and down 53% from February 2022.

New listings in March were down 15.6% compared to the same time last year in all three counties. Individually, new listings were down by 22.1% in Worcester, 3.3% in Wicomico, and 7.7% in Somerset from March of 2021.

“The market is still very strong but with interest rates starting to rise we may see some slowing as buyers leave the market,” said Coastal Association of REALTORS President Grace Masten. “We still have very little inventory, only 0.9 months in March, and buyers taking a little more time and increasing the days on market would help stabilize our market.”

She continued, “There are many factors that are contributing to our housing crisis. We have years of underbuilding. The cost of materials like lumber and concrete have skyrocketed over the last two years and though we can’t predict the future, if interest rates continue to increase then now is the time to buy a home and lock in a low-interest 30-year rate.”