BERLIN – Residents of all ages descended on Henry Park Sunday to join together to celebrate newly refurbished basketball courts.

The courts, which now constitute a brightly painted mural, were christened with hours of one-on-one and three vs. three play as the community cheered from the sidelines Sunday. Elected officials and an estimated 1,500 area residents attended the first ever Love Day at Henry Park to commemorate the refurbishment of the park’s basketball courts, which sport a new paint job as well as new backboards.

“It is my sincere hope this court plays a part in making the citizens and the children and everyone here in the town of Berlin better people,” longtime Councilman Dean Burrell said. “I would like to ask us, as this event came together, let us continue to be together to work for the betterment of the Berlin and remember to keep our children first.” 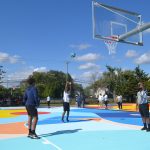 The nonprofit We Heart Berlin spent months fundraising and coordinating an effort to turn the Henry Park basketball courts into a mural. Twenty-five volunteers spent two weeks putting 225 gallons of paint on the more than 16,000-square feet of courts under the guidance of artist Shelton Hawkins. Hawkins, mural designer Kelsey Hess and We Heart Berlin’s dozens of supporters and volunteers were among those in attendance Sunday.

“I’ve never seen a community come together to do a project like this,” said Hawkins, who has spearheaded similar projects throughout the country. “This is amazing.”

Police Chief Arnold Downing praised the partnerships that supported the project along the way—six churches stepped up to provide food for Love Day—and expressed optimism for We Heart Berlin’s plans for a Berlin skatepark.

“Whatever you can say, whatever can come out of your mouth, whatever’s in your heart can happen,” he said.

Tony Weeg, founder of We Heart Berlin, thanked the countless people who played a part in bringing the mural and backboards to the park.

“One thing I have to mention is why I do all of this,” he said. “For me when I moved to Berlin three short years ago it became very clear to me the connectivity between the two sides of Berlin was very nil. My goal in life is to sort of drive change in positive ways. To drive change here in Berlin and figure out ways for us to get across this highway again with ease so that our children and our families can walk to the ice cream store. Instead of having only one intersection having more than one intersection. And if we do bigger and better things we’re going to have to because people from all sides are going to want to get to this side. That’s what I really want more than anything.”

He talked about the importance of being thankful and “how to live on the high of gratitude.” He drew laughter when he acknowledged Councilman Jay Knerr, who defeated him in last fall’s election.

“Thank you for beating me in the town council race,” he said. “You enabled me to do this. I cannot thank you enough.” 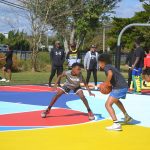 Jeron Whaley, one of the DJs emceeing the event, took a moment to recall his own years playing basketball at Henry Park with Adrian Bowen, the Berlin native who first brought up the idea of painting the courts.

“He’s a friend of mine,” Whaley said. “Many days I spent on Branch Street playing in their backyard, tearing their court up, in the house probably tracking dirt everywhere… When we first came out here we had the rusted rims, we had the crack going down the center of the court, that’s how we avoided rolled ankles. The backboards, it would just lean and lean with you. This is huge.”

Bowen, a We Heart Berlin board member, told the crowd how the concept for the courts came about when he first saw Hawkins’ work in Easton two years ago.

He sent a message to Weeg on Jan. 28 looking for direction on how to make the concept a reality.

“Little did I know this was the guy,” he said. “This was the direction I needed to seek. He went in headfirst along with me.”

He said he was grateful for everyone who helped.

“I want to thank each and every person that came out here and put a stroke of paint down,” he said.

As balls bounced off backboards and teenagers practiced their layups — one group scrimmaging with a Berlin police officer and Mayor Zack Tyndall — Sen. Mary Beth Carozza said the overwhelming success of the event was a testament to community partnerships.

“This is so uplifting,” she said, adding that the event was likely just the start of something within the community. “It’s setting a tone that this can become even more of a place of celebration.”