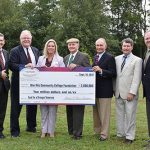 Left, Kim Gillis, chairperson of Wor-Wic’s board of trustees, and Marty Neat, who is chairing the fundraising campaign, is pictured with Dr. Ray Hoy, right, president of Wor-Wic Community College, discussing the newly-named Patricia and Alan Guerrieri Technology Center with Alan and Michael Guerrieri. Submitted Photos 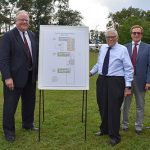 Pictured, from left, are Dr. Ray Hoy, president of Wor-Wic Community College; Marty Neat, a member of the board of trustees who is chairing the “Preparing for a Stronger Tomorrow” fundraising campaign; Stacey McMichael, executive director of the Richard A. Henson Foundation; and members of the foundation board of trustees, Tom Evans, Steve Farrow, Vic Laws and Jon Sherwell.

SALISBURY — Dr. Ray Hoy, president of Wor-Wic Community College, has announced the start of the public phase of a $10 million fundraising campaign called “Preparing for a Stronger Tomorrow” at a groundbreaking ceremony for the construction of a new applied technology building.

The groundbreaking ceremony was attended by more than 100 people, including members of the college board of trustees, state and local dignitaries, major donors, college foundation members, the campaign steering committee, employees, students, alumni and other friends of the college.

Marty Neat, a member of Wor-Wic’s board of trustees who is chairing the campaign, said gifts and pledges totaling $8 million have been received to date. During the silent phase of the campaign, the college was able to obtain two leadership gifts of $2 million each, from the Patricia and Alan Guerrieri Charitable Fund and the Richard A. Henson Foundation.

In recognition of the $2 million gift from Alan Guerrieri, the new applied technology building will be named the Patricia and Alan Guerrieri Technology Center. Private donations designated for technology (up to the first $500,000) are eligible for Henson Foundation and the State of Maryland matching funds, while each additional dollar designated for scholarships or technology (up to $1.5 million) is eligible for the Henson Foundation matching funds.

Neat explained that the campaign is broken down into three major areas of need — $2.5 million for high-tech, state-of-the-art equipment for the new building; $3.5 million for technology across campus that will be used to implement, update and sustain relevant cutting-edge technology across the institution; and $4 million to support students who are in need but not eligible for other sources of financial aid.

Neat thanked the donors, saying that “they recognize that the best social program in the world is a job and the best way for a community to progress is to educate and train its greatest resource – its people.”

Hoy reminded those assembled 90% of Wor-Wic’s students stay, live and work in the community, even after they go on and earn advanced degrees. “Our graduates provide the quality trained workforce to meet the needs of our business community,” he said.

The 50,000-square-foot building will be located on the south side of the campus on the site of the former soccer field and will support credit programs in the college’s occupational education division, with an emphasis on applied and emerging technologies such as industrial technology, supply chain management and alternative energy, as well as current and additional workforce development courses in the areas of transportation and industrial trades.

The building will also include a makerspace multipurpose laboratory where students and community members can gather to create, invent and learn. Several specialized industrial laboratories, a computer laboratory, classrooms, student study spaces, a conference room and offices to accommodate credit and non-credit employees to support these programs will also be housed in the new building.

In addition to the building, the project includes new roadways and an expanded parking lot in front of Brunkhorst Hall. The parking lot expansion will provide additional parking spaces for visitors who are seeking registration and/or financial aid services. The entrance roadway and Brunkhorst parking lot enhancements will also improve the flow of traffic and pedestrian safety throughout the campus.

Scheduled for completion before the fall of 2023, the $36 million building project is funded by the State of Maryland and Wicomico and Worcester counties. The Becker Morgan Group won the bid for architectural services, with Whiting-Turner as the construction management firm.