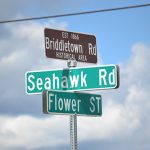 Last week’s landmark sign, pictured at right, unveiling event including a gathering of the Briddel family as well as local dignitaries. Photos by Charlene Sharpe 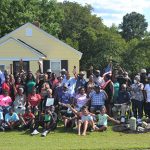 “It’s always very important when you talk about your history and you put it in perspective,” Worcester County Commissioner Diana Purnell said. “Today we have history all around us.”

Flower Street, from Seahawk Road to Route 376, runs straight through the heart of Briddletown, which was named after the Briddell family. Land records indicate that the history of Briddletown goes back to 1866, following the close of the Civil War. Thirteen individual property titles – with parcels ranging in size from one to four acres lining the main road along Flower Street in and around the Kitts Branch tributary of Trappe Creek east of the Town of Berlin – make it possible to track the community’s development, according to county officials.

“They are descendants of George and Martha Briddell, the first African American family to purchase property in this place in an era when society worked to deter this…,” Purnell said. “Their actions have ensured their family legacy, which is a piece of Worcester County’s history, will be remembered and talked about from generation to generation.”

Briddell-Fowlis thanked county officials for their help in bringing the interpretive sign as well as the lane markers to the neighborhood. She pointed out the unveiling ceremony was taking place in the yard in front of Sarah Briddell Smack’s home. The home was where the first Briddell family reunion was held more than 40 years ago.

“It’s only fitting for us to be in this yard today,” she said. “Cousin Sarah worked so hard on the family reunion.”

Melanie Pursel, director of the Worcester County Office of Tourism and Economic Development, said she hoped the county could bring even more attention to Briddletown in the future. Sen. Mary Beth Carozza said that as someone who’d grown up in Worcester County, she was happy to see its history celebrated.

“The fact that we have this history here, it’s being recognized, it’s being preserved, it’s the story that needs to be told,” she said.