OCEAN CITY – For the first time in my years as a reporter, I had an opportunity this week to join the GEICO Skytypers on a close-formation flight over Ocean City.

On Thursday, as The Dispatch staff wrapped up this week’s issue of the paper, I left my office and headed to the Ocean City Airport, where I climbed – not so gracefully – into a World War II-era plane with a member of the GEICO Skytypers Air Show Team, which will perform in this weekend’s 14th annual OC Air Show.

“It requires different skillsets than you are normally used to …,” my pilot, Lead Solo Steve Salmirs, said of the aircraft. “We’ve brought Blue Angels and Thunderbirds [pilots] up on practice days, and they’re like, ‘I never realized how much more work and how much more difficult it is than flying jets.’”

Based out of Long Island, N.Y., the GEICO Skytypers Air Show Team performs a low-level, precision-flying demonstration featuring tactics and maneuvers taught to World War II and Korean War pilots in the 1940s and 1950s. In addition to air show performances, the team skytypes giant messages that can be as tall as the Empire State Building and seen for 15 miles in any direction.

As the team gears up for this weekend’s performances, I accompanied Salmirs on a flight in one of the six World War II military training planes. Joined with other reporters, I was given a helmet, flight suit and brief instructions before climbing into the No. 6 aircraft for the ride of my life.

“It’s a perfect day for flying,” Salmirs told me before taking off.

Salmirs’ calm, friendly demeanor gave me every confidence it would be an amazing flight. And, after learning of his past accomplishments, it was very clear I was in good hands. 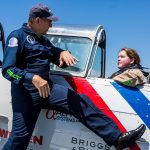 Salmirs, who joined the Skytypers in 1996, started flight training his sophomore year of high school. After graduating from Embry-Riddle Aeronautical University, he began a career as a calibration engineer at Kennedy Space Center, working on ground and flight equipment used on space shuttles from 1980-1982. Salmir then joined the U.S. Air Force and was selected to fly the F-16 Viper during his service in the military.

Today, Salmirs is a commercial pilot. But for the past 25 years, he’s served as a member of the GEICO Skytypers team, spending roughly 15 weekends each year performing air shows for the public.

As our planes left the runway, and the coastline came into view, it was easy to get distracted by the picturesque scenery. But my attention soon turned to the other Skytyper planes as they inched closer to mine in a tight formation. I would later learn the wingtips of each aircraft came within mere feet of each other as we reached breakneck speeds of more than 140 mph.

“It was a three-foot wing overlap,” Salmirs said.

The majority of our flight was spent off the coast of Ocean City. As spectators watched from the beach below, Salmirs and his teammates conducted a line-abreast formation, close- and extended-trail maneuvers, and more, leaving trails of smoke in their wake. Returning to the airport, Salmirs then warned me of the tactical maneuver the team would perform as they approached the runway. And one by one, Skytyper planes began peeling away from one another as they made their descent.

Salmirs said a lot of work goes into putting on air shows. Just this week, for example, the team spent 18 hours one day preparing for this weekend’s performances. By the time the GEICO Skytypers fly over the beach on Saturday and Sunday, they will have already gone through roughly three-and-a-half hours of training that morning.

“We do things like brief, debrief, walk through maneuvers on the ground, until we get it the way we want it – the radio calls, the maneuvers, the positioning,” he said of his team’s preparations. “Then when we go up, what the crowd sees is the reward.”

Salmirs said he enjoys flying in the OC Air Show each year, as it gives him an opportunity to interact with people and take in the coastal scenery.

“It’s just gorgeous,” he said. “We’ve always been honored and lucky to be here.” 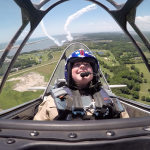 Salmirs said the Skytypers’ participation in the OC Air Show not only gives people the opportunity to learn about the team’s sponsors, but about the planes themselves.

Powered by 600-horsepower Pratt and Whitney engines, the six SNJs can perform all the maneuvers of a fighter plane, but at lower speeds. Salmirs noted the advanced training aircraft taught World War II pilots how to fly with a heavier engine and more complex systems and conduct basic fighter maneuvers.

“I really wish people will appreciate the maneuvers based on military and tactical maneuvers and appreciate the heritage of the planes,” he said. “These were living in World War II and are still going strong.”

The GEICO Skytypers Air Show Team will be among the many performers in this year’s 14th Annual OC Air Show, which returns to Ocean City June 19-20 for a two-day lineup of world-class military and civilian performers.