OCEAN CITY — The Art League of Ocean City is celebrating 30 years of providing college scholarships, awarding 69 scholarships since 1991 to local 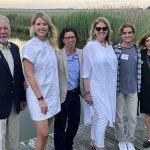 students pursuing a college degree in the visual and performing arts.

In 2021, seven students received scholarships, presented at a First Friday ceremony by Worcester County native and Broadway star Jennifer Wills, who was the first student to receive an Art League scholarship.

On First Friday, Wills was joined by Kay Ayres who in 1991 presented the first Art League scholarship to the future lead singer of “The Phantom of the Opera.”  Wills said the financial help was important to her success.

“It was wonderful to be recognized for my hard work by someone other than my parents,” said Wills, who has returned to her native Eastern Shore to raise her family. “I used the scholarship money during my time at Salisbury University where I received my BA in Music Education.  I then received my MM from Indiana University and spent 20 years in New York working professionally in theatre and music including starring in several Broadway shows and headlining with symphonies across the United States.”

This year’s scholarships include the inaugural $5,000 Sidney M. Beckstead Award, in honor of the entrepreneur, artist and jeweler who passed away in 2020. The recipient is Colin Porter, graduate of Stephen Decatur High School, who will attend the Fashion Institute of Technology, focusing on jewelry and footwear design.

“Sid began his career in the jewelry industry in Ocean City,” Sherrie Beckstead said. “It is with great humility and honor that we want to celebrate Sid’s creative gifts by awarding a scholarship in his name.”

The recipients are Serap Aksu, a SDHS graduate who will attend Salisbury University; Lilly Jones, graduating from the Salisbury School and attending the Savannah College of Art & Design; and Allison Marx, a SDHS graduate who will attend the University of Maryland College Park. Three previous scholarship winners reapplied for and were awarded continuing scholarships: Lamont Hall, who attends the Pratt Institute; Sara Hancock, who attends Salisbury University; and Alana Troxell, who attends Marymount Manhattan College.