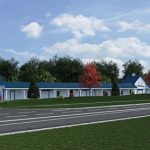 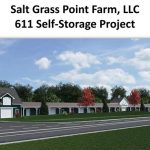 The site plan for Salt Grass Point Farms Mini Storage, an eight-building facility proposed in West Ocean City, was approved by the commission last Thursday. The project’s connections said mini storage would be a low impact use for a piece of property long zoned commercial.

Cropper told the commission the 75,000-square-foot facility was proposed for property on Route 611 south of Snug Harbor Road. He said the land was “imminently developable” but as self storage would not have a huge impact on traffic or sewer. He added that extensive thought had been put into the design of the facility so that it would be attractive.

“We think it’s a great addition to the community,” Cropper said.

Chris Larmore, one of the project’s partners, acknowledged that it was difficult to make mini storage look like anything other than what it was. Nevertheless, he said he’d latched onto the idea of modeling the facility’s appearance on that of an attractive horse barn.

“I actually went online and looked at different farms and barns…,” he said. “The goal was to bring to the table what would appear to be a family horse farm out in the country.”

Larmore said feedback he’d received from various parties regarding the proposed design had been positive.

“Everyone really likes the appearance,” he said.

“It does look very favorable,” said Jerry Barbierri, chair of the commission.

Commission member Ken Church said he was excited for the project but questioned the quality of the building materials.

Larmore said he wanted to make sure the facility was built with material that would hold up for years. He said the reason he’d submitted renderings in two possible colors — green as well as white with blue — was because he was concerned the green might fade.

“We all seem to like the green, but greens just don’t do well,” he said.

He added that he was waiting for guarantees and examples from the manufacturer before he made a final decision on color.

“It’s going to be predicated on it being able to stay that way,” he said.

The commission voted unanimously to approve the project’s site plan.