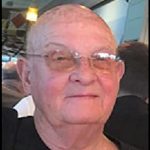 Born in Washington DC, he was the son of the late Roger L. Flather, Sr. and Rose Winfield Flather. He is survived by his wife of 63 years, Lorraine Flather, and children Douglass Flather and his wife Tami, Daniel Flather and his wife Julie and Patricia Sprecher and her husband Barry. There are five grandchildren, Brittany Glauser, Victory Brito, Jacob Sprecher, Taylor Sprecher and Cassidy Flather, and one great-granddaughter, Charlotte Sprecher. He was preceded in death by his sister, Lois Tremper.

Mr. Flather had worked for Verizon until retiring. He was also a member of the Air Force National Guard.

Cremation followed his death. Letters of condolence may be sent via: www.burbagefuneralhome.com. A donation in his memory may be made to St. Jude’s Children’s Research Hospital, 501 St. Jude Place, Memphis, Tenn. 38105 Arrangements are in the care of the Burbage Funeral Home in Berlin. 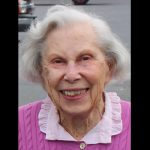 OCEAN PINES — Margaret Woollen Rehkemper, born March 12, 1921, passed peacefully into heaven of natural causes while at home surrounded by her children on Jan. 25, 2021.

She was born into a large family and known to all as Marge. As a child during the depression, she learned the habit of never being wasteful and she never was. She liked to talk about the exciting days when as a young adult she lived in Baltimore and worked at The Sun paper. She fell in love and married John Woollen in 1947. John’s engineering job with DuPont took the family all over the country. Marge never failed to make each new house a home and developed lifelong friends in each new town. After her beloved John’s sudden death in 1973, Marge moved from Red Bank, N.J. to Ocean Pines. There she met a kindred spirit named Wilbur Rehkemper. They married and spent many happy years in Ocean Pines keeping busy and active in their church and community. Both of them liked to travel and they did so frequently. Wilbur passed away in 2003. Since recovering from a broken hip in July 2017, Marge has made her home at Gull Creek Senior Living in Berlin. There she was known to fly back and forth down the long hallway to her mailbox using her new walker. True to form she felt right at home in her new apartment, enjoyed her life there, and was blessed with wonderful compassionate caregivers.

Marge was a loving presence in the lives of her three children, Jack Woollen and his wife Susan, Peggy Rush and her husband Billy and Mary Catherine Woollen. She also loved and took much pride in her three grandchildren, Dawn Woollen, Roger Rush and his wife Sarah, and Nathan Rush. Marge was thrilled to become a great grandmother to Oliver Nathan Rush in December 2019. Marge was always very sociable and treasured her friends and large extended family.

Marge savored her 99 years on this earth. Many times in recent years we heard her say, “I don’t know why the Lord has left me here on earth for so long,” but whatever the reason was she made the absolute most of the time she was blessed with. She was a woman of strong faith in God and a person who looked for opportunities to be helpful to others. Some of her enjoyments were reading, bridge playing, blueberry picking and square dancing. She volunteered for many years at the Berlin Nursing Home and loved to help out with whatever the Little Sisters of Jesus and Mary of Salisbury needed help with. If she was able to help she was enthusiastic to do so.

A celebration of Marge’s life will be announced at a later date. A donation in her honor may be made to The Little Sisters of Jesus and Mary, 411 Poplar Hill Avenue, Salisbury, Md. 21801 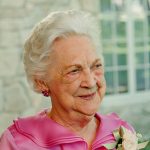 Born in Pike County, Mo. on Aug. 9, 1921, she grew up on her parents’ farm. She attended Northeast Missouri State Teachers College and earned a Bachelor’s Degree in Elementary Education. Lois went on to earn the equivalent of two Master of Education Degrees as she enjoyed a successful career of 35 years as a public-school teacher. She also taught Sunday school in various churches during her lifetime.

In June of 1948, she married her husband of 55 years, Darwin Brock. She went on to enjoy a life of world travel as the wife of a military oﬃcer.

Lois approached every life challenge with a positive outlook, grace, and intelligence. She was an individual of many interests including bridge, puzzles, game shows, and traveling. She visited most states in the USA in addition to many foreign countries. She was active in the Social Order of the Beauceant and many Oﬃcer’s Wives Clubs, often serving as president. Most of all she was dedicated to her family. In her later years, she especially enjoyed spending time with her daughters and their families. She took great pleasure in caring for her “grand- dogs”.

She was preceded in death by her beloved husband, Colonel Darwin A. Brock. She is survived by her two loving daughters, Dr. Marilyn Lemos of Sunset, S.C., and Tracey Conaway of Salisbury, and her brother, Harold Chamberlain, of Glendive, Mont.

A memorial service will be held at a later date where she will join her husband in Arlington National Cemetery.

The family is grateful for the support and care provided by Coastal Hospice of the Eastern Shore and are suggesting contributions be made to Coastal Hospice in lieu of ﬂowers. P.O. Box 1733 Salisbury, Md. 21802-1733. 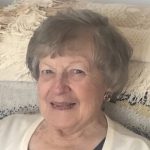 Joan was born March 17, 1940 in Baltimore, the proud daughter of Lester P and Margaret Miskimon.

Joan loved caring for others. Babysitting, cooking, baking and volunteering were among her life’s passions. She loved the holidays, especially St Patrick’s Day and enjoyed vacations at the beach and playing in the snow with her children and grandchildren. Her working career included stints as a cake decorator at Mars Supermarkets, waitressing at Friendly Restaurants and a claims adjuster at USFG. Joan was an active member of Our Lady of Fatima Church in Baltimore and faithfully attended Holy Savior Church in Ocean City in her later years.

In 1973, Joan found true love in marrying Warren “Lefty” Merling. Together they enjoyed a lifetime of traveling, time with friends and caring for their children and grandchildren. In addition to her husband Lefty, Joan is survived by son, David Hartman, his wife Marie and children Ryan and Lauren, and son, Maryland Delegate Wayne Hartman, his wife Sharon and their children Alyson and Trent. Wayne and Sharon have been loving caregivers for their mom and dad for the past several years. Joan is also survived by her step-daughter, Sharon Stewart and husband John. Joan was preceded in death by her oldest son, Gary J. Hartman as well as step children Pat Andrews and Richard Merling and her brother, Lester P Miskimon, Jr.

A viewing will be held at Schimunek’s Funeral Home in Nottingham, Friday, Feb. 5 (3-5 p.m. and 7-9 p.m.) and a Catholic burial mass at Our Lady of Fatima Church at 10 a.m. on Saturday, Feb 6. In lieu of flowers, donations can be sent in Joan’s name to either the Alzheimer’s Association of Greater Maryland or the Stansell House/Coastal Hospice in Ocean Pines.