OCEAN CITY – While much has changed at the Boardwalk, Fisher’s Popcorn continues the time-honored tradition of serving its famed fare to visitors year after year.

Located at Talbot Street and the Boardwalk, Fisher’s Popcorn has served generations of families at its corner concession stand, churning out fresh batches of popcorn from its large copper kettles each day.

In 1937, Everett Fisher went into business with Edmund Pusey, opening a Boardwalk concession stand. Known as Pixton’s Popcorn – as Pixton was the maiden name of Pusey’s wife – the establishment used Fisher’s secret recipe and sold popcorn for 5 cents a bag. 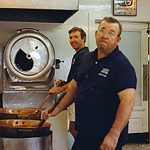 “My grandfather worked with somebody up in Philadelphia, or somebody up that way, selling popcorn,” Don said. “The man left one day, and my grandfather never learned how to make the popcorn. He never told him the recipe. So he threw together his own little recipe and started making it. He left, came down here, got a business partner and opened the store.”

After a few years, Pusey left the business and the stand was renamed Fisher’s Popcorn. During those early years, Don noted that business was slower, and the Boardwalk was quieter.

“Back in those days the ocean came up to the Boardwalk,” he said. “My grandfather would basically make a batch of popcorn then go out there and fish. That’s how slow it was. Of course, that was in the late 30s, so it wasn’t exactly the most prosperous time either.”

“And with all the rationing, they had to change the recipe a little bit,” Don said. “You couldn’t get the sugar, so they’d use molasses.”

Around 1978, Donald Sr. took over the family business. During that time, Fisher’s Popcorn started a newsletter, expanded the storefront and made a brief foray into distribution through a deal with Saks Fifth Avenue.

From a young age, Don and his two sisters worked alongside their parents at the store. He remembers when a small bag of popcorn cost 15 cents and Boardwalk businesses closed after Labor Day.

But not everything has changed from those early days on the Boardwalk, Don said. Their secret caramel popcorn recipe remains the same, and familiar faces are seen working behind the counter year after year. 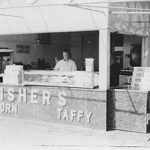 An early look at Fisher’s location on the Boardwalk is pictured.

“I’ve even got kids working for me now whose parents worked for me,” he said.

In 2010, Don and his sister Cindy Twilley took over the family business and began introducing new popcorn flavors to the menu. His mother, Calvina Fisher, continues to have a hand in the business, and his other sister, Martha Hall, operates several Fisher’s Popcorn stores in Delaware, independent from the original Boardwalk location.

Don is even joined by his wife and two daughters, who will one day take over Fisher’s Popcorn for the next generation of Boardwalk visitors.

“It’s been fun,” he said. “It still is fun. The work is hard, the hours can be long, but the employees are great and, in general, I love the town of Ocean City.”