SNOW HILL – A $100,000 grant to Atlantic General Hospital was the deciding factor in this week’s approval of Worcester County’s $204 million budget.

Though an initial motion for the Worcester County Commissioners to approve the county’s fiscal year 2021 budget failed with a 3-4 vote, Commissioner Bud Church reversed his position against the budget once it was amended to include a $100,000 grant for Atlantic General Hospital (AGH).

“I just can’t understand why the commissioners wouldn’t want to support an industry that takes care of us,” Church said.

As the commissioners prepared to vote on the proposed budget Tuesday, several last-minute funding reconsiderations were brought up by individual commissioners. Church said he wanted to ask for reconsideration of a grant for AGH after the commissioners voted 4-3 to cut it last month. He stressed the hospital was one of the largest employers in the county and provided key health care services to local citizens.

Commissioner Josh Nordstrom, who said his wife worked at the hospital, also advocated on behalf of the $100,000 grant Church proposed for AGH.

“I understand the dedication of the people who work there,” he said.

Nordstrom said the hospital was currently working with the health department to provide free COVID-10 testing in Pocomoke.

“It’s absolutely the wrong move to defund the hospital in the middle of a pandemic,” he said.

“I appreciate AGH and what they’re doing in the community,” she said.

Commissioner Joe Mitrecic, one of those who voted against providing the hospital funding last month, said he’d shared his own hospital experience during the commissioners’ meeting with AGH CEO and President Michael Franklin to illustrate his concern.

“I don’t think he took it the right way and many people out in the community didn’t take it the right way …,” he said, adding that he’d spoken to hospital board members in the weeks since. “They admit there’s a disconnect between the administration at the hospital, the county commissioners and possibly the community as a whole.” 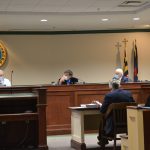 He said he wanted to see AGH approach Sussex County for funding, as many of the hospital’s patients came from Delaware. He maintains that the hospital is trying to grow too fast.

“They’re more concerned with fundraising and building buildings than they are with taking care of the people in this community,” he said.

Mitrecic said he’d shared his own experience at AGH to point out the failures of the facility. He added that the county was supporting medical services through other areas of its budget, such as through fire and EMS funding.

“I’ve been maligned in the paper about this, that I’m withholding, personally withholding, the funds from AGH because I got bad service,” he said. “That is not the truth. I just used my experience to point out what went on.”

Mitrecic added that since voting against the funding, he’d received more calls from people who supported his decision than those who did not.

Church said Mitrecic appeared to have a personal grievance with Franklin and that his stance against funding the hospital was shortsighted.

“Atlantic General Hospital goes out of its way to raise its own funds and it seems like they’re being criticized for that,” Church said. “I think we’re being very shortsighted and I think it’ll show up in the election coming down the road. With the people I’ve talked to that have called me I said I’m not running again for office. Now I might reconsider it.”

Commissioner Jim Bunting said he agreed with Mitrecic. He also referenced criticism of the commissioners’ decision not to provide AGH funding in an editorial in The Dispatch.

“If you’re making a decision about a threat by an editor from a paper that four commissioners should be ripped or whatever he meant, I’ve never made a vote in nine years whether it was going to get me reelected or not and I’m not worried about what effect it will have on any election,” Bunting said.

Church’s motion to give the hospital $100,000 failed with a 3-4 vote, with Mitrecic, Bunting, Commissioner Chip Bertino and Commissioner Ted Elder opposed.

The commissioners went on to increase grants to the Maryland Food Bank, Furnace Town and the towns of Pocomoke and Snow Hill. When Nordstrom eventually made a motion to approve the overall budget, however, Bunting, Bertino and Elder indicated they would not be supporting it. Elder said revenue projections were too high and that he didn’t appreciate the “money grab” at the end for last minute grants.

Bertino expressed frustration over the county’s piecemeal approach to EMS funding and said he also had major concerns about revenue in the coming year.

Bunting agreed and said Gov. Larry Hogan had mentioned the possibility of as much as a 30% reduction in revenues related to COVID-19.

“I hope he’s wrong,” Bunting said. “I hope I’m wrong. If I am wrong I’ll be happy but I think we’re going to be in bad trouble.”

Mitrecic said he would support the budget because it provided the Town of Ocean City with funding for providing EMS coverage in West Ocean City.

“Although I’ve sworn to never vote for a budget that doesn’t reach Ocean City’s tax setoff or whatever they’ve asked for, I feel it necessary to support this because I think that the money that we’re paying for the West Ocean City fire and EMS protection is a step in the right direction and is much needed,” he said.

When the vote was called, just three commissioners voted to pass the budget. Church, Elder, Bunting and Bertino voted against the budget.

Staff reminded the commissioners that they were required by local law to pass a budget by the first Tuesday in June.

Bunting said he was not changing his vote.

“And I don’t think two other commissioners are, so I don’t know what Commissioner Church’s issue is,” Bunting said.

“I don’t want to speak for Commissioner Church however I believe if we did fund AGH at $100,000 this budget would pass,” Nordstrom said.

Bunting said the board just couldn’t keep voting over the same issue.

“We can vote all day,” Mitrecic said.

The county attorney indicated that at this point the commissioners had to negotiate until they could pass a budget. Nordstrom again made a motion to provide AGH with the funding.

“I appreciate everything they do,” he said. “I’m in awe of what they’re able to accomplish.”

Church said that in his decades as a realtor, he’d seen the importance of schools and health care to the community.

“Having lived here for almost 50 years, I can see where the health care has grown,” he said. It’s bringing people to our community.”

Purnell said the county had found a way to accommodate all the school system’s requests to support the county’s younger generation and so should do what it could to support the area’s senior population.

“There’s a lot of good that was done in this budget this year,” he said, noting the funding for EMS in West Ocean City. “Even some of the items that were added this morning I felt strongly about … I don’t support the grant to AGH. But with that said I’m not willing to hold up this entire budget for that. I would hope that somebody would reconsider. More than one of us could reconsider the vote on this.”

The motion to provide the hospital funding passed 4-3 (with Bunting, Bertino and Elder opposed), as did the subsequent motion to approve the fiscal year 2021 budget. The approved budget maintains the real property tax rate of $.845 per $100 of assessed value and an income tax rate of 2.25%.

OCEAN CITY — The Ocean City Air Show will roar across the resort sky this summer after all on the weekend of Aug. 15-16, event officials announced on Thursday.Originally scheduled for June 13-14, the OC Air Show was postponed, but not cancelled back in April amid the height of the COVID-19 crisis in Maryland and… Read more »