BERLIN –   Plans for a 7-Eleven and hotel near the intersection of Route 50 and North Main Street will be reviewed by town officials next month.

At its June meeting, the Berlin Planning Commission is expected to review plans for a 7-Eleven and an 80-room hotel on the property annexed by the town last year at the corner of Route 50 and Route 818. While infrastructure improvements and development of the convenience store could move forward soon after commission approval is received, developer Spiro Buas says construction of the hotel will depend on how quickly the lodging industry bounces back in the wake of COVID-19.

“Until we see where hotels are, that may get delayed a year or so,” Buas said.

Buas asked the town to annex six acres on Route 818 last year. Though a citizen petition challenged the annexation, it lacked sufficient signatures and the annexation was approved by the town council. Buas said early on he wanted to see the site developed with a 7-Eleven gas station and convenience store as well as other commercial entities.

“It’s been a long process,” he said. “We have a site plan we’re happy with and have submitted it.”

The site plan shows a building adorned in more brick than typically seen on a 7-Eleven.

“I had to work with them on what I thought the city would want,” Buas said. 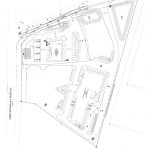 The proposed 8-room Fairfield Inn & Suites would be located south of Route 50 and west of Main Street.

The hotel shown in the project’s current concept plan is located just behind and to the south of the 7-Eleven. Buas said he hoped the brand would be Fairfield Inn and Suites.

“We’re going to try to get all teed up and ready to go for the hotel,” he said.

Beyond that, Buas said there were two more development spots on the site that weren’t yet earmarked for specific projects.

At its June 10 meeting the town’s planning commission is also expected to review another major project, as more apartments are proposed for Oceans East on Seahawk Road. According to Berlin Planning Director Dave Engelhart, the developer wants to add a mix of apartments and town houses to the site, which already has 180 units. The buildings being proposed would bring another 150-156 units to Oceans East.

Engelhart said that despite the pandemic, his office remained busy. Along with the development plans being submitted, he said permit applications remained steady.