These displays, and many more, filled the exhibit hall of the Roland E. Powell Convention Center as thousands of eighth-grade students took part in a career exploration event designed to engage and inspire.

On Feb. 27, Junior Achievement of the Eastern Shore held its second annual JA Inspire event in Ocean City. Throughout the course of the day, roughly 3,000 students from Worcester, Wicomico, Somerset, Dorchester, Caroline and Talbot counties interacted with representatives from 140 businesses across the Eastern Shore to learn about various career paths.

“Every one of them have something that’s hands-on and experiential so the students can truly grasp what a day in the life of that career looks like,” Junior Achievement Development Manager Lisa Thornton said. “Every vendor has been instructed to talk about salaries, the skills needed, how to get that job and what the educational requirements are. That way kids can leave here inspired, but also leave here with a roadmap on how to get that job.”

“When they come here they’ve already formulated questions to ask the employers …,” she said. “It’s more meaningful and they can leave with the information they need.”

Kasmier Williams, a student at Wicomico Middle School, said she was eager to learn more about potential law or veterinary careers at JA Inspire.

“I think this is a great event because I get to find the job that I want to do,” she said.

Officials said the goal of JA Inspire is to expose eighth-grade students to career opportunities on the Eastern Shore as they plan their high school coursework. And for employers, the event is an opportunity to engage with the future workforce.

McKenzie Bear, associate food technologist for Perdue Farms, said she wants students to know the company includes several divisions, each with its own skillset. She noted that the products and machines on display Thursday featured all aspects of the industry.

“This year we brought in several job fields,” she said. “We have sensory scientists, food scientists, packaging scientists, processing, engineering and a couple of folks from our HR and marketing group and our AgriBusiness division. So we are able to encompass all of Perdue, which is beneficial because a lot of people don’t know the other job fields that are within this type of corporate environment.” 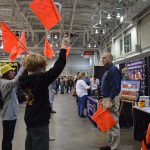 Ashley Thierfeldt, education programmer and coordinator with the Delmarva Discovery Museum, said she was eager to teach students about career opportunities for those interested in educational programming on the natural and cultural history of the Eastern Shore. She said items on display for students included live animals, model boats and more.

“We got involved because we wanted to get our name out there, but we also wanted to teach the kids that there’s a much broader field around here,” she said. “You get a lot of kids who are really interested in animals and things like that but don’t know about the field and the jobs around here. We wanted to talk to them about what working with animals can be, and also how you can pair it with the education aspect.”

Matt Drew, lead sourcing and onshore facilities manager for Orsted, said the company participated in JA Inspire for its first time on Thursday in an effort to raise awareness about offshore wind careers. He said Orsted would be seeking operations and maintenance technicians and support personnel for the Skipjack offshore wind project.

Drew praised the JA Inspire event for demonstrating to students the many career opportunities available on the Eastern Shore.

“These are the jobs that we will be offering the eighth-graders today that are coming into the workforce in four years …,” he said. “This is a critical time in a person’s development, and this is the best time to introduce them to every career possible so they can start to make those decisions early and get into the right career path.”