A procession transported Ross, a pilot who was killed when his surveillance plane crashed in Afghanistan in late January, from Dover Air Force Base to his hometown in Virginia Tuesday morning.

“He is a hero,” said Commander Tom Wengert of American Legion Synepuxent Post 166 in Ocean City. “He sacrificed for us. He gave his life so we can have our freedom.”

Wengert was among the dozens of area residents gathered in the parking lot of Food Lion in Berlin before 9 a.m. Tuesday amid a crowd of law enforcement and Berlin Fire Company vehicles. Many had just learned of the procession Monday but made a point to come out to pay their respects to the fallen soldier.

“He’s a veteran,” said Billy Greenwood, a member of the American Legion in Berlin, when asked why he came out for the procession. “We found out about it yesterday. It’s a decent turnout for a day’s notice.” 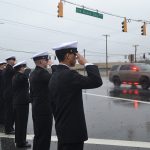 Wengert said he’d been notified about the procession by the Worcester County Sheriff’s Office and had quickly gotten on the phone to share the news with other local groups.

“This is part of our mission,” said Steve Hannon, president of Hogs and Heroes Foundation Maryland Chapter 8. “We’re trying to get the word out so more and more people will come out for these types of things. It’s important for members of the military to be recognized.”

A number of Town of Berlin staff were present to show their support as well. Tim Lawrence, the town’s electric utility director, said he came out to represent the municipality as well as another organization he’s involved with, Bikers Without Borders.

“We just wanted to show our respect to a veteran,” he said. “Bikers Without Borders does a lot of charity work for first responders and members of the military.”