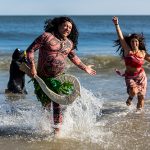 Creative costumed individuals are always a hit at the penguin swim. Photo by Chris Parypa 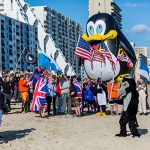 As they have every year, the Bull on the Beach, pictured, led all business teams raising $27,486. To see more photos from the New Year’s Day, click over to www.facebook.com/thedispatchoc Photo by Chris Parypa

On New Year’s Day, 713 participants donning costumes and bathing suits took a plunge in the chilling waters off Ocean City for the 26th Annual Penguin Swim, a fundraiser to support the nonprofit community hospital.

This year, the hospital raised a preliminary gross amount of $89,063 from the Penguin Swim, but officials expect that total to increase in the coming days.

“We expect that number to increase as final donations roll in,” Event Coordinator Joy Stokes said.

Since its inception, the annual Penguin Swim has grossed more than $1.4 million for health care services in the community, making it one of the hospital’s largest fundraisers.

Stokes said participating in the Penguin Swim has become an annual tradition for hundreds of residents and visitors and many local businesses.

The Bull on the Beach team kicked off this year’s Penguin Swim with its traditional parade down the beach, stopping briefly for a wedding ceremony. The newlyweds later joined the rest of the swimmers as they made their way into the water.

Organizers this year recorded a water temperature of 47 degrees for the 2020 Penguin Swim, but that didn’t stop people from participating.

“Even though it was a little chilly, people really got into it this year,” Stokes said.

Not all participants arrived dressed as penguins, organizers said. Costumes included “Saved by the Bell” cast members, Frosty the Snowman and even a pair of flip-flops.

“I think this year’s Penguin Swim was a huge success,” Stokes said. “You could just feel the excitement. Everyone was pumped up, and the morale was high.”

Officials attributed the event’s success to AGH Foundation’s staff, the Penguin Swim committee, and event co-chairs Michael Cylc and Phillip Cheung, who devoted a great deal of their time and energy leading up to New Year’s Day. They also recognized the support of the residents and resort visitors that AGH serves, as well as the many AGH/HS associates and community volunteers.

“It was a warm and wonderful day to hold our 26th Annual Penguin Swim,” said Michael Franklin, president and CEO of Atlantic General Hospital. “It’s always great to join community members and visitors in supporting one of the most important assets in our community. The swim is a fun and unique way to kick off the New Year.”

Winners listed in order of award sequence are as followed: