BERLIN – A Berlin family is using a love of music to give back to a local charity this holiday season.

For the third year in a row, Berlin resident Josh Davis and his two children — Robert, 10, and Zooey, 8, — have written and released an original Christmas song. They’re donating all of the proceeds from the sale of the song, which is available for download on various platforms, to the Church Mouse Thrift Shop.

“We’re donating to a charity that gives to the poor and that’s a great cause,” Robert Davis said. “After all, it is Christmas.”

According to Josh Davis, it was his acquaintance with Church Mouse volunteers Helen and Mike Wiley that inspired him to propose the idea of a family Christmas song to his kids in 2017. The Wileys are well-known for their giving spirit in Berlin.

“We started doing this three years ago after I saw what people like Helen and Mike Wiley were doing for the community,” said Davis. “I didn’t have a lot of money or free time,  but I knew we could record a short, simple Christmas song and hopefully raise a little money for a great cause. I also thought it would be a nice way to teach my kids about giving back during the holidays, so I got them involved and now they look forward to it every year.”

This year’s song, “All of us on Christmas,” recorded under Josh Davis’ band name Paper Scissors, originated with a piano tune Zooey Davis created during a visit to her grandmother’s house.

“I was playing a piano note and then dad came over and helped me and played some notes too, and then that became a part of the song,” she said.

They went home and built a song around the melody. Robert Davis said the actual recording process went pretty smoothly, since various takes were layered together to make up the finished product. He said the longest part of the process fell to his father, as he edited the song.

“It took a long time for dad but the finished product was amazing,” Robert Davis said. “I loved it.”

He said last year’s song was highlighted by a British podcast so he’s hopeful this year’s music will prove popular as well. He said he was happy to give the song’s earnings to the Church Mouse.

“We did that because the Church Mouse, I would say it’s like a big charity that feeds people all around and gives them clothing and presents because they’re really nice,” Robert Davis said. “Dad thought of the idea, ‘let’s make some songs so we can raise money to donate to the Church Mouse so we can feed homeless people and give some pretty poor people presents.’ This Church Mouse, they donate to anywhere in the whole word.”

The Church Mouse, which is located at 101 N. Main St., is an outreach of St. St. Paul’s Episcopal Church. Thrift shop proceeds are used to support a variety of local, national and international causes. In December, the shop accumulates its funds for the year and gives to local homeless shelters, food pantries and Toys for Tots programs. The shop also provides toys to children whose parents are incarcerated and even operates a meals on wheels program.

“December is about giving,” said Helen Wiley, coordinator at the Church Mouse.

She was thrilled to receive a donation for the shop the first year the Davis family wrote a Christmas song. She was even happier to see them turn it into an annual tradition. 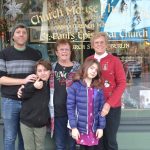 “Last year when they came in with a big check I burst into tears I was so happy,” she said. “And Josh did too. I just love what they’re doing.”

She applauded Davis for teaching his children the importance of giving back.

“We all have so much,” she said. “We have too much sometimes. For him to teach his children, and his children to learn that, that’s a blessing in itself.”

Josh Davis said he was happy to contribute to a worthy cause like the Church Mouse. His son agreed.

“Another good thing about making these songs is we actually have a ton of fun doing it,” Robert Davis said. “Last year we had one part where we were laughing in the background so we had this big tickle fight. True story.”

For more information, visit the Paper Scissors band page on Facebook or Bandcamp. “All of us on Christmas” is available for $2.99 on iTunes, Spotify, Amazon, YouTube and Google Play.

OCEAN CITY — The resort community this week lost a treasured friend and icon this week with the passing of Ocean City Tourism Director Donna Abbott.Abbott succumbed on Wednesday after a ferocious battle with cancer at the age of 62. Abbott was a fixture in Ocean City for decades, beginning her career in municipal government… Read more »