OCEAN CITY –  Mayor Rick Meehan honored a Maryland couple’s more than six decades of history in Ocean City with a key to the city last week.

Last Friday, Meehan presented a key to the city to John and Kitty Dyer. The Dyers, who both turned 90 earlier this year, have vacationed in Ocean City since they met under the Esskay Clock on a rainy Memorial Day weekend in 1951.

“Your story’s inspirational,” Meehan said. “It’s so great to see your whole family here and generations that you’ve brought here to enjoy Ocean City. It’s just so wonderful. Those are the traditions we love to see.”

While Baltimore native John Dyer grew up vacationing in Ocean City, staying each summer at the Admiral Hotel with his family, it wasn’t until 1951 that he met his future wife. He was on a visit with college friends and she with her church choir when they met on the Boardwalk at 9th Street, under the Esskay Clock. They went out that night for their first date, a drink at the George Washington Hotel.

“He didn’t have a tie on so I was upset,” Kitty joked.

It wasn’t enough to keep her from seeing him, however, and the couple went on to marry in 1953. They’ve vacationed in Ocean City together every year since, first at the Admiral and eventually in their own vacation home on Bayshore Drive. They have countless memories of days on the beach with their six children as well as quieter memories of vacations before the kids were born. Kitty remembers the first time her husband took her out fishing in a boat. They reeled in two fish at once as soon as they threw the lines out.

“I thought every time you went out that was what happened,” she said with a laugh.

All the Dyer children had summer jobs in Ocean City, and even Kitty took a job as a hostess at Phillips Crab House once the children were grown. Her husband, who spent years in sales followed by time as a stock broker in Timonium, always made sure the family spent much of their summer in Ocean City. In the years since his retirement, the couple has been able to spend even more time in the resort. 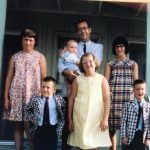 The Dyer family is pictured at their Bayshore Drive family in 1967.

“It’s just a great place to be,” John Dyer said.

Several of the Dyers’ six children and 15 grandchildren were able to join them on the Boardwalk last week as they were presented with the key to the city. Their oldest son, John, said his parents passed their love of Ocean City on to the entire family.

“They opened a door to us,” he said. “A key to the city is a wonderful memento of that.”

His sister, Joanne Dyer White, agreed. She and her children fly from California every summer to spend time with the elder Dyers in Ocean City. Her kids, now adults themselves, remember their vacations spent participating in Ocean City Beach Patrol camps and people-watching with John and Kitty on the Boardwalk after visits to Fishers and Thrashers.

“This is tradition for our family,” White said.

She said that in spite of their age, her parents had yet to slow down. Sitting on a Boardwalk bench chatting with the mayor Friday, passersby would never have known Kitty Dyer had been in the hospital with pneumonia just the day before.

“They have such a will to live you forget they’re 90,” White said.