BERLIN –  The town will celebrate its silver screen debut with a series of events to honor the 20th anniversary of the hit movie “Runaway Bride” this month.

Berlin has declared August “Runaway Bride Month” as it is now 20 years since the release of the movie that brought Paramount Pictures to town.  The movie, starring Richard Gere and Julia Roberts, was released July 30, 1999, after being filmed in Berlin the previous fall.

“There’ve been a lot of things that contributed to what Berlin is now but the movie is by far one of the biggest things that happened,” Victorian Charm’s Steve Frene said. “That was one of the things that really put Berlin on the map. We got a lot of great mileage out of that and it continues to draw people to town.”

Those who were in town 20 years ago remember well the flurry of excitement surrounding the news that the little town of Berlin was being considered for a major movie. At the time, the state was promoting Maryland as the ideal filming location because of its array of landscapes and Berlin was one of several towns being considered for “Runaway Bride.” Berlin resident and real estate agent Cam Bunting recalls driving the initial scout around as she checked certain attributes off on a list. When she decided the town fit the bill, director Garry Marshal himself came to Berlin. 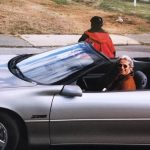 Actor Richard Gere is pictured during shooting in Berlin in 1998. Photos courtesy of Cam Bunting

“The production people flew into Salisbury and came into town on a bus and toured the town,” said Ellen Lang, a former town council member and shop owner. “Garry Marshal decided it was just like a Hollywood set.”

She believes the fact that the town had just recently moved its utilities underground helped make it appealing to the Paramount crew.

“We were the right place at the right time,” she said.

Once Berlin had formally been selected as the filming site, Bunting was actually hired by Paramount to handle local matters. The company used her office for casting, set up production in the former PNC Bank building and had her find housing for the stars. While some stayed in hotels, she secured private homes for Richard Gere and Joan Cusack. She said Marshall stayed in the Atlantic Hotel.

“The only ones that knew where they were were their assistants, their drivers and me,” she said.

Paramount kept her busy, asking her to handle everything from finding extras to making sure paperwork was completed.

“They’d call me all hours of the day,” she said. “They’d say ‘where can we put these horses?’ and I asked when they were getting here. They said ‘they’re already in the air.’ There just wasn’t a lot of time.”

As many in town goggled at the Hollywood crews as they walked about, working out how Berlin would be transformed into the fictional town of Hale, Mary Beth Lampman was at home with her two-day old daughter. When the location director walked Marshall down Baker Street to show them a house on the north side, it was Lampman’s house that drew his attention.

“They knocked on the door and took pictures and measurements,” she said. “We moved out for six weeks.”

Paramount put Lampman and her family up in a condo while they took over the house on Baker Street.

“We had just purchased the house the year previous,” Lampman said. “We had a list of things we wanted to do and they did a few of them for us.”

She said they removed old carpet, put in a driveway, tore down an old outbuilding and did landscaping.

“We’d just put up a brand new fence,” Lampman said. “They took it down and put up another new one and aged it. Everything they did they distressed to make it seem like it’d been there a while. The lady across the street always kept her bushes immaculate, they added in some fake ones. Little touches like that were fun to watch.”

Similar transformations were underway at businesses used in the film. Victorian Charm was the bridal shop in the film.

“They shut down the store for three weeks,” Frene said. “They came in and took pictures of everything the way it was then they packed up all the merchandise and repainted and put in new carpet. One cabinet and one chandelier were all they kept.”

Paramount paid the shop’s employees for the time they were off.

“We felt that was more than fair because Victorian Charm lives on forever in a great movie,” Frene said. 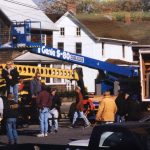 Bunting said Paramount officials didn’t let little challenges stop them once they started filming. When the state wouldn’t shut down Route 50 so the football game scene could be filmed at Stephen Decatur High School, crews traveled to Snow Hill High to do the scene. When they filmed the farm scene on Libertytown Road, they didn’t let the fact that the corn had withered as it does each fall stop them.

“The corn was brown,” Bunting said. “They spray painted it green to make it look like it was still summer.”

Residents were shocked to see all the work that went into filming. Suzanne Parks, who lived next door to the Lampmans, said the street was closed as cranes and spotlights were brought in for the camera crews.

“They had more equipment than you can imagine,” she said. “No wonder movies cost so much.”

Of course with the filming came opportunities to see the stars. Parks watched her granddaughter approach Julia Roberts and invite her to dinner.

“She said thank you very much but I have plans,” Parks recalled with a laugh.

Roberts is remembered fondly in town. Lang said that when the actress, drink in hand, saw the sign on the shop door stating “no food or drink,” she asked if it was alright if she brought hers in.

“Richard Gere usually had some sort of security but Julia Roberts was very down to earth,” Lang said. “She was very unassuming, very normal.”

Lang said Roberts rode her bicycle in town and visited a bazaar at Buckingham Presbyterian Church.

“She went down on a Saturday morning and bought everything those ladies had made,” Lang said.

Bunting remembers the night that Paramount celebrated Roberts’ birthday when filming was being done on Baker Street.

“She gave all the little girls that were there roses,” Bunting said.

Mayor Gee Williams, who like many in town hovered around the filming locations, joked that he was disappointed to catch a glimpse of Gere rather than Roberts.

“I remember standing in a large crowd of people on Main Street which had been closed off for the film crews…,” he said. “I believe we were all standing across the street from the Victorian Charm.  Eventually, he walked out the shop to much applause and shouts of joy from many ladies in the crowd. Some film production surrounded him and escorted him away while he smiled broadly and waved to the onlookers.”

Williams acknowledged the impact the movie has had on Berlin.

“I believe the filming and subsequent success of the Runaway Bride was significant in validating and encouraging the continued historic revitalization of downtown Berlin,” he said. “It certainly accelerated the pride Berlin citizens had already initiated in recovering our small town charm.”

Lang said filming benefited the economy at the time, as all of the people who came to town with Paramount spent money there. When the movie came out the following year, it began drawing visitors to town.

“It helped put us where the town is today,” she said.

Lampman, who no longer lives on Baker Street, said she was surprised at how quickly after the movie’s release strangers started gawking at her family’s house.

“We joked about putting a silhouette of Julia Roberts in the window,” she said.

Even today, Randy Davis, who with his horse takes visitors on carriage rides through historic Berlin, says visitors still ask to see the hotel and house featured so prominently in “Runaway Bride.”

As for what locals thought of the movie once it was released, it took a few showings for them to take in more than the backdrop. Even at the local premier, which was held in West Ocean City a day before the movie came out nationally, viewers found it hard to focus on Roberts and Gere.

“No one was watching what was going on in the movie, they were looking in the background to see who they knew,” Frene joked. “There was just so much about Berlin. I had to go back a second time and see what was in the movie. To this day when we watch it you’re still looking in the background… I don’t think there’s ever been another movie done that captures a town so much.”

To celebrate the 20th anniversary of “Runaway Bride,” the town will offer free guided walking tours every Monday in August at 4 p.m. Tour guide Mary Raley will take participants past places such as the Atlantic Hotel and the Baker Street house. The tour, which is sponsored by the Gulyas family, will last 45 minutes.

“It should be fun,” Raley said. “I hope people will love it. Since it was the second movie with Richard Gere and Julia Roberts, that catches everyone’s attention.”

In addition, downtown merchants will create “wedding themed” window displays that will highlight “Runaway Bride” trivia. The Calvin B. Taylor House Museum will also have a display featuring items used during filming as well as photographs taken during the process. Saturday, Aug. 24 will be “Runaway Bride Day” in Berlin. The movie will be shown on Jefferson Street at 8:30 p.m. Attendees are encourage to wear movie costumes to win prizes sponsored by the Berlin Arts and Entertainment Committee. The committee will also be offering a special café table seating option during the movie that will feature a drink and light fare and a slice of wedding cake.