BERLIN –  Construction of a permanent solution to the shoaling problems in the Ocean City Inlet is expected to begin in 2021, federal officials said at a public meeting last week.

Representatives of the U.S. Army Corps of Engineers (USACE) shared information about planned improvements to the Inlet and a scour hole near Homer Gudelsky Park at a packed meeting at the Berlin library May 30. While a long-term fix to Inlet shoaling is still in the planning phase, officials assured those present that after decades of study it was moving forward.

“We have been studying this for a while,” said Jacqui Seiple, project manager. “It’s been a little bit slow but now we have funding committed. We have a budget, we have a schedule. We think this is going to progress and we hope to be able to move forward with this quickly.”

Bill Anderson, assistant secretary of the Maryland Department of Natural Resources, thanked local officials, boaters and interested individuals for attending the meeting. He said ACE representatives would share information about the Inlet project as well as plans to address the scour hole.

“We’ve got two major projects that are really going to guide the future of the Inlet over the next several decades,” Anderson said. “The projects are going to be laid out to you but the important thing we’re really going to be looking for is your questions, your comments, your ideas that’ll help us refine this project going forward before we start putting shovels in the ground.”

He stressed that progress was being made on addressing the shoaling in the Inlet.

“I’m sure there are people in the room that are skeptic,” he said. “Many of you are probably thinking ‘you know what I’ve been to this movie before and it didn’t turn out well,’ because of course we’ve been talking about the Inlet problem for over 20 years now. Not a whole lot moved forward until very recently.”

According to Seiple, the Inlet and scour hole projects are moving forward through the USACE Continuing Authorities Program, which allows the agency to implement small scale projects without getting specific authorization from Congress.

“The problem with the Ocean City Inlet is the accumulation of sediment in the channel,” she said. “That’s what we’re calling shoaling. The Inlet is a very, very dynamic environment. Basically, what happens is we could go out there today and dredge and depending on environmental conditions we might go back next week and still need to dredge some more.”

Seiple provided a brief history of the Inlet, which was created in 1933. Between 1934 and 1936, the north and south jetties were constructed by USACE to stabilize the Inlet.

Seiple said a 1998 Ocean City Water Resources Study recommended deepening the Inlet but that the issue hadn’t been addressed while the Assateague Island restoration project was underway.

In 2017, however, local officials joined together to reaffirm interest in addressing the shoaling problem. That kicked off the USACE’s current efforts. The agency confirmed there was federal interest in the project.

“Normally after that process we would begin a several year feasibility study, but when we presented the federal interest determination and discussed it with higher level management at North Atlantic Division they recognized that there has been already a lot of work done…,” Seiple said, referencing the 1998 study. “As a result of that they thought it made sense to move into the design and implementation phase. That’s where we are today.”

Though the USACE hasn’t yet determined the best way to address the shoaling problem, initial cost estimates put the project’s price at $8.5 million.  The project’s cost share agreement sets the federal contribution at 90% and the non-federal contribution at 10%. Seiple pointed out, however, that because the project was being done through the USACE Continuing Authorities Program there was a $10 million cost limit.

Currently, the shoaling issue is being addressed through dredging.

“It might be dredged for maintenance dredging or opportunistically if we’re out there for the Assateague Island project,” she said. “If they’re dredging in the area they’ll come into the Inlet, grab a scoop from the problem areas which tend to be near buoys 11 and 12, and help us out that way. That’s how we’ve been keeping the Inlet clear for navigation. It’s not really a good long-term solution so we’re really looking for something more permanent at this point.”

She said possibilities being considered at this point included the addition of a structure to increase water velocity or simply deepening the Inlet.

“At this point everything is on the table,” she said. “We’d like to hear from you as to what you think might be a good alternative.”

As the USACE works to select a solution, the agency will be considering the cost.

“We want the benefits to outweigh the cost,” Seiple said. “This is done looking at primarily the commercial vessels. We look at the revenue that vessels are bringing in, how much they’re spending on maintenance costs because of the problems in the Inlet, how much they’re spending on fuel costs because they’re waiting for the tide to come in, all those kinds of considerations will go into the economic analysis.”

USAC officials are still collecting data and developing models of possible solutions. They hope to have model alternatives done by the end of the year and will begin project design in early 2020. That should be completed by the fall and construction is expected to start in early 2021, Seiple said.

Following her presentation, Andrew Roach, project manager for the USACE study addressing the scour hole near Stinky Beach, outlined his research. He said the hole was getting deeper and larger and was beginning to threaten the stability of the shoreline. Some sections of riprap in the area are starting to fail as a result of the scour hole.

“I keep thinking about it like a pothole that keeps growing deeper and larger,” he said.

While research on the issue is underway, Roach said this project had a slower timeline than the Inlet project and would likely not enter the design and implementation phase until 2021.

When attendees had the opportunity to share their questions and suggestions, one speaker attributed the shoaling problems to beach replenishment efforts.

USACE staff said they were considering that possibility and that various data collection efforts would improve their understanding of hydrodynamics and sediment transport. 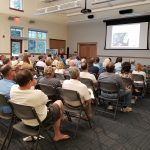 Attendees are pictured at last Thursday’s meeting on the Inlet at the Berlin Library.

“We’re actually focused on solutions tonight and not just gathering together to talk about the problem,” she said. “I wanted to give some context to those who haven’t been participating in the meetings the last four years or so. We really have made progress and we’re now at the solution stage.”

Ray Nornes told USACE officials he’d dredged the channel multiple times and had experience with the scour hole. He suggested testing its behavior by pumping some of the sand from the shoaled areas into it.

Fritz Pielert, who’s lived near Stinky Beach since 1959, talked about changes he’d noticed with the scour hole and the area’s shoaling problems over the decades. He suggested that the shoaling was less of a problem when the bridge extended farther.

“What’s changed is the dynamics of what trained that water to go where it went,” he said.

The USACE presentation and posters presented last week are available online at https://www.nab.usace.army.mil/OceanCity/.