BERLIN — Charles “Buddy” Jenkins was honored last week with the inaugural Stephen N. Parker Conservation Legacy Award. The award was presented at a banquet hosted by the Lower Shore Land Trust (LSLT) at the Atlantic Hotel in Berlin. 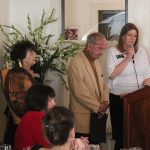 Charles “Buddy” Jenkins was presented proclamations from the Maryland House of Delegates and Senate and Gov. Larry Hogan by Pat Schrawder and Emily Nock.

The award was designed by Jordan Pippen of Steel and Glory in Berlin. Speakers included Dave Wilson, Jr. and Jim Rapp of Conservation Community Consulting. Pat Shrawder and Emily Nock presented Jenkins with recognition citations from Maryland Gov. Larry Hogan and the Maryland Senate and House of Delegates.

The award was to be given in memory of Parker, a renowned conservationist, to recognize a landowner or conservation practitioner for their contributions to private land conservation on the Lower Eastern Shore. Parker served on the Board of Directors of LSLT and the Maryland Coastal Bays Program and is remembered for his work as director of the Virginia Coast Reserve with The Nature Conservancy – as well as being a long-time board member of the Citizens for a Better Eastern Shore. Parker’s background in business and nonprofits served to bring together economic development and conservation – further preserving the health and productivity of large ecosystems while meeting the needs of human communities. 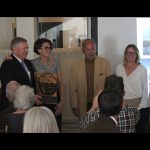 Jenkins is president of Bayshore Development Corporation, which operates the Jolly Roger amusements, Thrashers French Fries and hotel properties in Ocean City. However, Jenkins is also known as the owner of one of the most significant tracts of land in northern Worcester County totaling over 2,000 acres of forest, prime agriculture and coastal wetlands. The property serves as an ecological anchor for the coastal bays. Through deed restrictions, the Jenkins Family Trust has preserved the property from future development.

The LSLT is a nationally accredited  land trust that has, since 1990, protected more than 21,000 acres of pristine Eastern Shore farmland, critical habitat, streams, parks, trails, and more.