BERLIN – What do garden hoses, boat wrap, tennis shoes and lawn furniture have in common?

“You name it it’s in there,” said Mike McClung, Worcester County’s recycling coordinator.

Contrary to popular belief, just because an item’s plastic doesn’t mean it’s recyclable, at least not in Worcester County. Even the familiar recycling symbol — the arrows forming a triangle — is not a sure sign that an item can be reused. While recyclables are typically identified with the symbol and a number from one to seven, Worcester County primarily accepts just those labeled with a one or two.

“We can only process what our vendors will accept,” McClung said. “That and we’re a small facility. We’re not set up to handle anything large.” 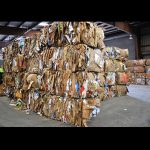 Bales of cardboard are pictured ready to be sold at the county’s recycling plant. Photos by Charlene Sharpe

Last year, Worcester County’s recycling rate was slightly more than 33 percent. As the Great Pacific Garbage Patch — a giant collection of floating trash between California and Hawaii — continues to make headlines, many citizens are eager to do their part.

Worcester County currently recycles plastic, aluminum cans, cardboard, paper and metal. The county also recycles yard waste by turning it into mulch, which is then used by the county and sold to area residents.

The hub of the county’s recycling operation is the Worcester County Recycling Processing Center, located at the central landfill in Newark. The processing center takes in all the recyclables collected at the county’s various homeowner convenience centers and recycling stations. Truckloads of recyclables — divided into cardboard, paper, plastic and aluminum — are dumped into the building’s main bay. The material is then pushed onto a conveyor belt, where a handful of employees sort through it by hand, removing what can’t be recycled. The material that makes the cut is then deposited into a baler, which compacts it and wraps it with wire. Bales are then stacked in the processing center until there are enough for the county to sell. Right now, because demand for cardboard is low, nearly 50 bales of the stuff — weighing in at 1,500 pounds each — fill the building. McClung said it would likely be sold overseas. The county can’t do that, however, until it has enough bales of cardboard to fill five shipping containers.

Prices for recyclables vary, McClung explained, as they do with any commodity. While demand fluctuates, plastic is generally the hardest material for the county to get rid of. A recent load sold for $40 a ton.

“That’s the highest it’s been,” McClung said. “It costs you a couple thousand a day just to process it.”

“They’ll reject a load if they get something that’s not up to par,” he said, adding that recyclables considered contaminated — items covered in oil, for example — had to be landfilled. 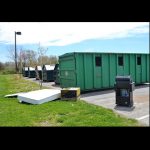 An ongoing problem at the county’s recycling drop-off locations is public dumping, as pictured here this week in the Wal-Mart shopping center lot.

The labor-intensive process of sorting through recyclables—making sure plastics are only those coded “1” or “2” and that things like laminated menus don’t make it into the paper bin—contributes to the expensive cost of recycling. The county spends close to $800,000 a year on recycling. While salaries and benefits make up more than half that annual expense, other costs come in the areas of equipment, removal expenses and fuel, among others. The recycling operation brings in about $174,000 in revenue to the county each year.

Another costly aspect of the county’s recycling operation is illegal dumping. McClung says it’s a problem at each of the county’s unmanned recycling stations. People dump everything from bags of trash to old mattresses next to the recycling bins.

“People go in there that don’t want to dispose of it properly,” said McClung, adding that last week the county picked up 800 pounds of trash at the Whaleyville recycling station. “It’s not as bad as it used to be but they still do it.”

Also a problem at the unmanned stations is the amount of garbage thrown into the recycling bins. While some people blatantly dispose of their trash there, others simply don’t follow instructions and throw their aluminum cans, for example, into the bins without first removing them from the plastic bag they’ve transported them in.

While some jurisdictions have taken to installing cameras at unmanned stations to prevent dumping, in Worcester County officials have said the cost would be prohibitive, as the county would have to purchase the equipment and pay for the time of the employee reviewing the recordings.

While the processing center is busiest during the summer when the county’s population swells, recycling keeps McClung and his staff working all year. In April alone, the county took in 333 tons of recyclables. In addition to the materials dropped off at the central landfill for recycling, the county also accepts recyclables at homeowner convenience centers in Berlin, Snow Hill and Pocomoke as well as at four unmanned recycling stations. The busiest of those, located at the Berlin Walmart, averages about 50 tons a month.

“Walmart is very busy,” McClung said. “They’re up there a couple times a day (emptying the bins).”

McClung encourages anyone with questions about recycling in Worcester County to visit the department’s website, http://www.co.worcester.md.us/departments/publicworks/recycling.