OCEAN CITY – Surfers Healing returned to the beaches of Ocean City this week for a day-long surfing camp that gives children with autism and their families a sense of support and community.

On Wednesday, 200 children with autism gathered in front of the Castle in the Sand Hotel where they were given the opportunity to share a tandem board with surfers from Hawaii, California, Puerto Rico and New Zealand and ride the waves as onlookers and families cheered them on.

Kelly Loeser, camp co-director, said Surfers Healing is a highly anticipated event that gives families the chance to make memories and bond with other participants.

“It gives families and children a day where they are not judged,” she said.
“They are out with a group, bonding together under one umbrella.”

Camp Co-Director Kat Trammell, whose own son participates in Surfers Healing, said she views the event as a therapeutic approach for children with autism.

“These surfers are amazing,” she said. “They don’t even need words. They go out there and sing to the kids, play games with them. It’s just amazing. Sometimes the kids will have a conversation out there that they wouldn’t here because they feel more relaxed and calm.”

“I can come here and everybody understands that if he were to have a meltdown, no one would blink twice,” she said.

“It’s given him an experience that he wouldn’t be able to do otherwise, and he’s taking risks,” she said. “They have my eternal gratitude.”

Bethesda resident Jennifer Berzok said her 13-year-old son loves the water and has participated in Surfers Healing for two years.

“It’s a sense of community and comradery and he really feels a part of a brotherhood and sisterhood,” she said. “It’s built his confidence.”

“Gina looks for any opportunity to do something extraordinary and special,” she said.

LaHood, whose family runs a center for those with disabilities called St. Joseph’s House, said she viewed the event as a support system for families and children with autism.

“What we’ve seen is an opportunity for these families to get together and have support and have fun with their kids,” she said. 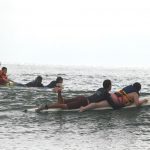 Baldini explained that the day is simply a chance for her to swim, see dolphins and meet friends.

Trammell explained that the children and their families often find a sense of community at the yearly event.

“It’s all about the kids,” she said. “We just want them to have an amazing day and we want the families to feel loved and supported and not judged.”

Surfers Healing founders Israel and Danielle Paskowitz started the organization in 1996 as a way to help and connect with their youngest son, who has autism. Israel Paskowitz found that surfing calmed his son and soon began inviting other families to join them.

Since that time, Surfers Healing has expanded to several yearly events around the nation and in other countries. Last year, more than 4,500 participants took part in a Surfers Healing surf camp.

“It gives them a radical day,” Trammell said. “It’s something they might not get the opportunity to do otherwise.”

For a full gallery of photos, click over to www.facebook.com/thedispatchoc.