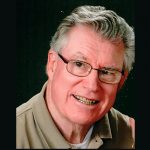 Born May 31, 1939 to William and Eileen Scanlon, he was raised in Bayside, Queens, N.Y. He was a gifted student and attended Pratt Institute in New York on a full academic scholarship from the U.S. Navy and graduated with a Bachelor of Science in Electrical Engineering. Following his graduation, he worked for the U.S. Navy at the Brooklyn Navy Yard. He earned a Masters Degree from Syracuse University. He worked for International Business Machines Corporation (IBM) for 37 years, retiring as a Senior Engineer. During his time at IBM, he was recognized for numerous distinctions and three of his inventions in computer architecture design were awarded patents.

He lived the majority of his adult life in Hyde Park, N.Y. He retired to Berlin in 2003. He was active in his community and his church, serving as a member of the zoning board in Hyde Park and as a lector at both Regina Coeli Catholic Church and St. John Neumann Catholic Church.

He was a field and track star in his youth and remained active throughout his life: Golf and skiing were his favorite sports. He enjoyed a wide-range of activities and hobbies, from camping and hiking, to working with his hands, to classical music and Shakespeare.

A devoted husband, father, grandfather, and friend, he is survived by his wife of 53 years, Jean Marie Fitz Simons, born in Far Rockaway, Queens, N.Y., and their four children, his daughter Tara Scanlon and her husband Harry Bainbridge, of Washington, DC, his son Terence Scanlon and his wife Dana DeLorenzo of Plantation, Fla., his son Michael Scanlon and his wife Aimee Scanlon of Alexandria, Va. and his daughter Catherine Rivieccio and her husband Michael Rivieccio of Highland, N.Y. He was the beloved “Pop Pop” to his nine adoring grandchildren, Andrew, Parker, May, Ned, Carter, Clara, Lila, Bianca and Alexis.

He is also survived by his brother Kevin Scanlon of Sag Harbor, N.Y. and his sister Maureen Scanlon of Green Port, N.Y.

A Mass of Christian Burial was held on Tuesday, Feb. 21 at St. John Neumann Catholic Church near Ocean Pines. Rev. Joseph MPR Coccucci officiated. In lieu of flowers, donations may be made to the Alzheimer’s Association (www.alg.org) or Coastal Hospice (www.coastalhospice.org). Letters of condolence may be sent via www.burbagefuneralhome.com. Arrangements are in the care of the Burbage Funeral Home in Berlin. 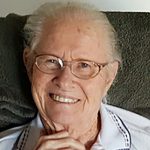 Born in Big Spring, Texas, she was the daughter of the late John and Allie Adkinson Murphy. She was preceded in death by her husband, Floyd M. Allmond. She is survived by her children, Kelly Lorraine Allmond of Parsonsburg, Md., Dorothy Arlene Allmond of Florida, and John Meade Allmond of Millsboro Del. She has four grandchildren, Christin, Jonathan, Ashley and Ryan, and four great-grandchildren.

Nelda (or “Nana to those close to her) dedicated her life to her husband, children and family. She had a short but rewarding career as a real estate agent to boost her husband’s sales success. At home, she was the cornerstone to a prosperous and loving household. She loved to sing and read, but most of all, she enjoyed the family life. You never saw Nana without a smile.

A memorial service will be held on Saturday, Feb. 25 at 1 p.m. at the Community Church at Ocean Pines, 11227 Race Track Rd, Berlin, Md, 21811. Rev. Boyd Etter will officiate. Friends and family are welcome to join her children one hour prior to the service. Inurnment will follow in the Garden of the Pines Columbarium. A donation in her memory may be made to Alzheimer’s association http://www.alzfdn.org/.

Arrangements are in the care of the Burbage Funeral Home in Berlin. Letters of condolence may be sent via: www.burbagefuneralhome.com.