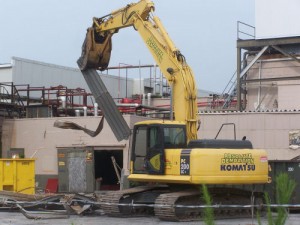 BERLIN – Six years after the Tyson chicken processing plant on the outskirts of Berlin closed its doors forever, its future remains in limbo, but demolition activity at the site this week signals something may be afoot at the historic property. Demolition began on the site first thing Monday morning with the giant claw ripping… Read more »

OCEAN CITY – Almost four months to the day since the March 30 fire on the south end of the Boardwalk that destroyed the Dough Roller restaurant and severely damaged the adjacent Marty’s Playland, a Worcester County grand jury on Tuesday indicted a local man on several counts of arson and other charges for allegedly… Read more »

OCEAN CITY – An Easton woman was arrested on prostitution charges last week after arranging a meeting with an undercover OCPD detective, who discovered the services she was offering on the Internet.Last Wednesday, Ocean City police arrested Jennifer Watson Ambrose, 35, of Easton, on charges of soliciting for prostitution after detectives discovered advertisements for her… Read more »

BERLIN – Area police this week are looking for a 39-year-old local man wanted on child abuse, numerous sex offenses and assault after a joint investigation pointed to him as a suspect in a sexual assault on a 7-year-old female victim. After an investigation conducted by the Worcester County Bureau of Investigation (WCBI) with assistance… Read more »

OCEAN CITY – Lifeguards and beachgoers faced a rare occurrence last Friday, when the carcass of a rare Atlantic sunfish washed ashore at 26th Street. “I’ve never seen one on the beach in Ocean City before,” said Beach Patrol Captain Butch Arbin this week as he recalled the events of last Friday. The sunfish appeared… Read more »

OCEAN CITY – The Police Commission considered a 30-day temporary permit at last week’s meeting, one that would allow potential taxicab drivers on the road during the permit approval process. Currently, obtaining approval for a taxi permit can take up to four to eight weeks, often preventing potential taxi drivers from being on the roads… Read more »

OCEAN CITY – One week after hearing a proposal for as many as 200 wind turbines off the coast of the resort in the future, resort officials this week defended their cautious approach to the issue specifically and all of the issues that come before them in general.During a work session last week, the Ocean… Read more »

BERLIN – Berlin electric customers pay more for power than any other electric customers in the state and one elected official wants to know why.“Currently we are paying the highest rates in the state of Maryland,” said Council member Ellen Lang said at Monday night’s town council meeting.The supply costs are reasonable, Lang said. The… Read more »