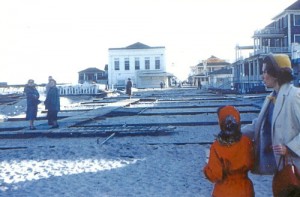 Eight blocks of Boardwalk from N. Division to 1st streets were rebuilt in concrete and widened by 10 feet between January and April in 1955. The Mayor and Council had decided to replace the wood with concrete due to maintenance costs. The George Bert Cropper Company did the work for $43,819 and used some of… Read more »

This postcard image (circa 1909) shows an Ocean City of the time before paved streets and traffic jams. Photographed from the old water tower on Somerset Street the view looks east across Baltimore Avenue toward the ocean. The tall brick chimney in the foreground was part of the town’s electric power plant while the original… Read more » 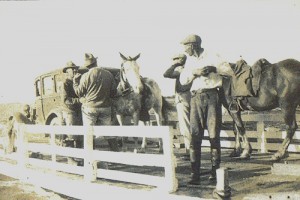 The Hurricane of 1933 created the Ocean City Inlet and separated the town from Assateague forever. Following the storm, the South Point Ferry was the only way for automobiles to reach Assateague Island and since the ferry could only carry a maximum of three cars, there was very little traffic. Assateague became a place for… Read more » 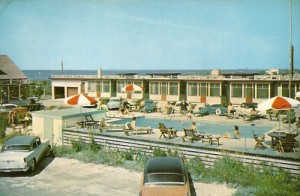 The Gordy Hall Motel Apartments were located on the bayside at 45th Street and Beach Highway from 1949 to the early 1970s. They took their name from owners Harold and Betty Gordy and Robert and Peg Hall and were known for their relaxed atmosphere and hospitality. The center building had been the old Brass Rail… Read more » 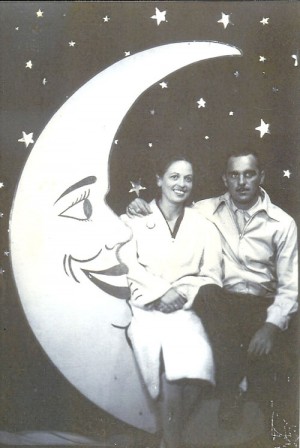 Ocean City has always been a place where people treasure their vacation memories. Before they opened their famous Mario’s Restaurant on Philadelphia Ave. (1954-2005),  Vera and Jack Maiorana ran a photography studio on the Boardwalk. Located south of Dolle’s Candyland and next to Grace Lovell’s “Grace’s Jewelry and Gifts,” it was a popular place. Pictured… Read more » 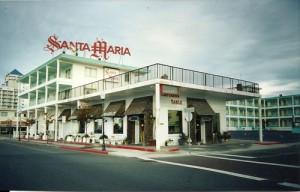 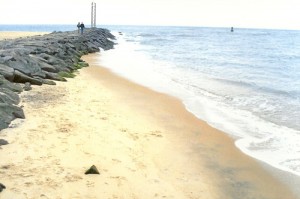 Ocean City was fortunate to escape widespread damage during Hurricane Sandy in October 2012. One of the short-term effects of the storm was a small beach that formed at the Inlet behind the north jetty a few weeks afterwards. Promptly dubbed “South Beach” or “Baby Beach” by locals and the media, this photo was taken… Read more » 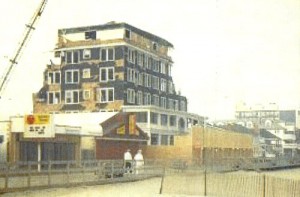 The George Washington Hotel was one of the few old wooden hotels not lost to fire along the Boardwalk. A series of blazes in the 1960s and early 1970s had destroyed the Plimhimmon, Hamilton, Colonial, Rideau and Roosevelt hotels. The George Washington was demolished in January 1990 because it no longer met building codes and… Read more » 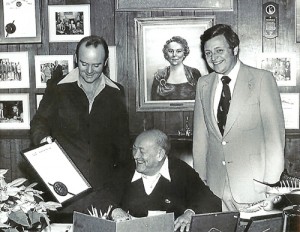 Salisbury had played host to the National Indoors Tennis Tournament for over a decade when the loss of the Wicomico Youth and Civic Center to a fire on June 27, 1977 made a new location suddenly necessary. Mayor Harry Kelley quickly put together a bid and traveled to Chicago with tennis promoter Jack Richards, left,… Read more » 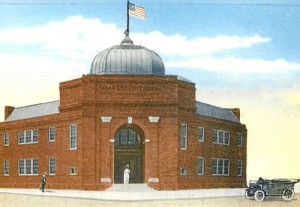 The building that houses today’s City Hall opened in 1915 at 3rd Street and Baltimore Avenue as a training facility for teachers. Known as the Maryland State Normal School, it was the first brick building in Ocean City. The Normal School lasted only two years and then became the Ocean City High School in 1917…. Read more »