BERLIN- Stephen Decatur’s varsity football team continued its magical run through the state playoffs last weekend with an impressive 36-7 win over Potomac on the road to advance to the quarterfinals.

The Seahawks won their first two home games as the top seed in the state 2A playoffs, beating C. Milton Wright, 45-13, and North Caroline, 43-27. Those wins advanced Decatur to the state quarterfinals and a date with a tough 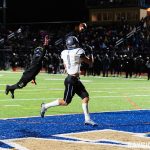 Decatur’s Luke Mergott reaches out for one of his two touchdowns in the Seahawks’ 36-7 playoff win over Potomac in the state 2A quarterfinals last Friday.
Photo by Bayside Sports-Vince Risser

The Seahawks trailed early in the first, 7-0, after a quick score by the Wolverines. Decatur’s offense got loosened up after that early setback and led 13-7 after two unanswered touchdowns in the first quarter.

The Seahawks continued their dominance in the second quarter, scoring two more times to take a 27-7 lead into

halftime. Decatur added nine more points in the second half to close out the improbable 36-7 win to advance to the state semifinals this weekend. After that early first quarter touchdown, the stout Decatur defense held Potomac scoreless the rest of the way.

In the win over Potomac last weekend to advance, Decatur got a total team effort on both sides of the ball. Brycen Coleman was seven for 11 passing for 79 yards and two touchdowns. Coleman also carried the ball 18 times for 108 yards and a rushing touchdown. Luke Mergott caught four passes for 59 yards including two touchdowns.