OCEAN CITY — Resort police officers are investigating an armed carjacking downtown that led to a multiple-county pursuit and ended with a fiery crash in Dorchester County.

Early last Friday morning, a concerned citizen informed Ocean City Police Department (OCPD) officers of a possible vehicle break-in in the area of Wicomico Street. While officers were on their way to investigate the report, they were dispatched to the area of Dorchester Street for a reported armed carjacking with a handgun, according to police reports.

OCPD officers located the victim, a 73-year-old male, who was suffering from a head injury. The victim was transported to TidalHealth Peninsula Regional Hospital with injuries not believed to be life-threatening. An update on the victim’s status had not been made public this week.

During the investigation, the victim informed officers he was standing near his vehicle on Dorchester Street when a group of three males approached him. One of the males pointed a handgun at the victim and demanded his personal belongings, according to police reports.

During the incident, the victim was struck in the back of the head with the handgun, according to police reports. The suspects then stole the victim’s vehicle and several personal items. OCPD officers quickly located the stolen vehicle at a convenience store on North Division Street.

Police attempted to initiate a traffic stop, but the stolen vehicle drove north on Philadelphia Avenue with two additional vehicles. All three vehicles crossed over the Route 50 Bridge leaving the town of Ocean City. During the pursuit, stop sticks were successfully deployed, disabling one of the vehicles. 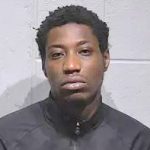 That vehicle was ultimately stopped in the West Ocean City area, and the driver, later identified as Jaquawn Daney, 19, of Baltimore, fled on foot. Worcester County Sheriff’s deputies located Daney and he was arrested by the OCPD. It was later determined the vehicle Daney was driving was an unreported stolen vehicle from Somerset Street in Ocean City.

OCPD officers did not pursue the remaining two vehicles and allied law enforcement agencies continued the pursuit. The vehicle that was carjacked in Ocean City was later stopped by the Wicomico County Sheriff’s Office and the driver, a 15-year-old juvenile from Baltimore, was arrested.

During a search incident to the arrest, Cambridge Police officers located the stolen handgun and several other stolen personal items on a second juvenile, a 17-year-old also from Baltimore. Numerous other personal items were recovered from the suspects and the vehicles involved in the multi-jurisdiction incident that began in Ocean City.

Officers were able to trace the property back to vehicle break-ins in the Ocean City and Baltimore areas. Through a coordinated effort between the OCPD and several allied law enforcement agencies, a total of five arrests were made.

Daney has been charged with armed robbery, robbery, carjacking, theft, reckless endangerment, first and second-degree assault and two counts of unlawful taking of a motor vehicle. He was transferred to the Worcester County Jail and is being held without bond.

The 15-year-old juvenile is currently being held in Wicomico County for crimes committed within Wicomico County. Charges against that suspect in Worcester County are pending. The 17-year-old juvenile was waived to adult status and has been charged with armed robbery, robbery, carjacking, theft, first- and second-degree assault, unlawful taking of a motor vehicle, possession of a firearm and ammunition and possession of a stolen firearm. He been transferred to the Worcester County Jail and is also being held without bail.

Two other suspects, a 14-year-old juvenile from Baltimore County, and a 12-year-old juvenile from Baltimore City, were apprehended in Dorchester County Each was released to a parent by the Cambridge Police Department. The OCPD is prepared and proactively handling criminal violations and citizen complaints of illegal activity to ensure the safety of residents and visitors. Citizens are reminded if they see something suspicious or have concerns about possible criminal activity occurring in Ocean City to reach out to the department using the Tip Line at 410-520-5136, email the OCPD at crimetips@oceancitymd.gov, or call the department directly at 410-723-6610.