OCEAN CITY — After a rather philosophical debate about zoning and allowable density, resort planners this week approved a site plan for a new 56-unit townhouse community on the property that for decades hosted the Sun and Surf Theaters uptown.

The Sun and Surf Theaters, which covered an entire city block along Coastal Highway between 143rd and 144th streets, was built in 1972 and for decades was an iconic entertainment venue in the north end of town. Earlier this summer, Sun and Surf representatives announced the property had been sold, the theaters were closing on Labor Day Monday after 50 years and the site has since been cleared.

On Tuesday, developer 143 Coastal Development LLC presented a site plan to the Ocean City Planning Commission seeking approval for a 56-unit townhouse project each with four stories, three bedrooms in a total of eight separate buildings spread across the site that encompasses an entire city block.

The commercially-zoned property could have supported a large-scale hotel or even more housing units, according to the code. However, the developer has opted to use around 60% of the allowable density, which provides more open space, common areas, a pool and landscaping, according to Planning and Community Development Director Bill Neville.

“This is an entire city block that could allow for 101 units,” he said. “They are proposing just 56.”

The proposed residential does not have access to a convenient pedestrian crosswalk for safe access to the beach. The nearest signalized intersection is located one block to the south at 142nd Street and many of the proposed units are in close proximity to the north-end transit stop with a continuous median in Coastal Highway. Those issues are still being resolved.

Despite the significant reduction in density, the planning commission voiced some concern the project could be an even better fit in the surrounding community with less units. The planners suggested reducing the number of units in each of the eight buildings.

“Now we’re building units that people can live in year-round,” said Planning Commission Chair Pam Buckley. “These are beautiful units, there’s no question. It’s scary to me every time the Mayor and Council propose another weekend event of something, and we get more and more people that want to live here year-round.”

However, attorney Joe Moore, representing the applicant, said the developer had already reduced the density to the point the project represents a far less intense use than what could be allowed. 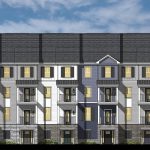 Buckley agreed the project represented a less-dense use of the property but suggested maybe one unit could be eliminated from each of the eight buildings.

“I don’t necessarily have a huge issue with the six units,” she said. “My thing has always been you can bring the unit count down and raise the price. I don’t want to get into the economics of it. If we want to maintain the quality of life in Ocean City, this is where people are going to live year-round. It’s not like one or two weeks of the year. They come down every weekend. You can develop a really, really nice site plan without it being a large number of units.”

Buckley said reducing the number of units below what would be allowed resulted in a better design for the site.

“You’re only using 61% of your allowable density,” she said. “Why did you do that? Because you think this is a better project than what the site would allow.”

Planning Commissioner Palmer Gillis said just because the proposed project for the former Sun and Surf site met all standards in the code didn’t necessarily mean it was the best use of the site.

“Just because it meets the code does not mean you have to crunch it down to the last inch,” he said. “It would be a better project for the customer, the developer and the town if you didn’t have to get down and say every detail is code compliant. That’s the letter of the law, but not necessarily the spirit of the law.”

Project consultant Jeff Thaler said cutting the number of units would result in a higher price for potential homebuyers.

“This group was looking for a sweet spot to sell units,” he said. “That’s how they came up with the six units. If they lose a unit on each of these buildings, the prices are going to go up and that’s not the customers they are looking for. They’re looking for customers looking to spend $600,000 to $800,000. They are not looking for units at $1.2 million or $1.3 million.”

Buckley agreed with Gillis on the code compliant issue.

“You continue to remind us that it’s code compliant,” she said. “Code compliant is the minimum level of what you want. The developer has already made a decision to reduce the density by 40% because that makes it a better project. What’s another 5% to make it an even better project.”

After considerable debate, the planning commission approved the site plan as presented with staff recommendations and a requirement for eight-foot sidewalks.