Decatur has solid all year, finishing with a 7-2 regular season record and a fourth seed in the state 2A playoffs. In their 2A playoff opener, the Seahawks cruised past C. Milton Wright, 45-13, at home to advance. In the second round last Saturday afternoon, a game moved from Friday night because of weather concerns, the Seahawks rolled past North Caroline, 43-27, to capture the regional championship and advance to the state quarterfinals. Decatur had narrowly beaten North Caroline during the regular season. 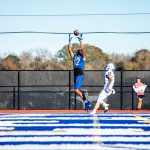 With the win, Decatur now advances to the state 2A quarterfinals this Friday on the road against Potomac in Oxon Hill, Md. Potomac will likely pose a formidable threat for the Seahawks, having finished with a 9-1 record and cruising through their first two playoff games. It appears Potomac likes to run the ball, which will challenge the Decatur defense. Potomac beat Northeast, 37-0, in its playoff game last weekend and had three senior running backs rush for over 60 yards.

As he has for much of the season, Brycen Coleman led the way for the Decatur offense against North Caroline last Saturday. Coleman passed 11 times for 186 yards and three touchdowns. He also rushed for 112 yards on 11 carries and two touchdowns.