Members of the Berlin Historic District Commission this week voiced their support for seeing two antique advertisements, painted on the sides of the building at 11 Pitts St., restored. In Snow Hill, a similar project that restored the “ghost sign” advertising the G.M. Dryden General Merchandise store was just completed.

“With all of the activity on Pitts Street, it would really add to that,” said John Holloway, a historic district commission member.

At the close of Wednesday’s meeting, Holloway brought up the Snow Hill project, which garnered local interest on social media in recent weeks. According to Snow Hill officials, local businesses, donors and the Worcester County Arts Council funded the restoration of the sign on the side of the American Legion building on West Green Street. The sign was leftover from the days of the general store run by George Marion Dryden from 1891 until 1934 in downtown Snow Hill. The sign was restored by North Carolina artist Scott Allred and local Snow Hill artist Olga Deshields.

Holloway told his fellow commission members he’d watched the progress on that project and thought the finished product was beautiful.

“I’ve been watching the one being redone in Snow Hill and it brought to mind the building here on Pitts Street,” Holloway said. “I thought boy it’d be nice if we could do something like that in Berlin.”

While the vintage ad in the alley on Pitts Street is hard to decipher, a portion of the one on the other side of the building is still very visible.

Other commission members said they loved the idea and suggested the Calvin B. Taylor House Museum could contain images of the signs from decades ago. Commission member Carol Rose said the commission had approved a similar project years ago but that it had never come to fruition. 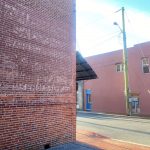 What remains of an old advertisement in the alley on Pitts Street.

Commission member Brian Robertson said the museum could provide information on the original ad and then groups like the Worcester County Arts Council, the Berlin Arts and Entertainment Committee and We Heart Berlin could potentially provide funding support if the building’s owner approved of the plan.

“I think you could probably cobble together the funding,” Engelhart said.