OCEAN CITY– Endangered birds are once again nesting off Ocean City thanks to an innovative project piloted by a conservation partnership.

For the second year in a row, a floating, wooden-framed platform in the bay provided a popular nesting site for common terns, an endangered colonial nesting waterbird. The project, a partnership of the Maryland Department of Natural Resources (DNR), Audubon Mid-Atlantic and the Maryland Coastal Bays Program, is working to address the 90-95% decline of endangered colonial waterbirds.

“This project is important to provide critically needed nesting habitat to retain populations in this area,” said Archer Larned, coastal bird habitat conservation coordinator for the Maryland Coastal Bays Program. “The number of terns is decreasing along the Atlantic coast due to losses of nesting habitat because of sea level rise, so we are providing a temporary solution to the lack of nest sites.”

The nesting platform was initially launched last year in an effort to provide habitat for colonial waterbirds, which have declined significantly since the 1980s due to sea level rise and the erosion of their natural sand nesting islands in the coastal bays. In its first year, the platform, which consists of paired sections bolted together and connected with locking hinges to allow the raft to flex during high waves, was successfully used by 23 pairs of common terns. Encouraged by the success, organizers expanded both the raft and the project team. The Maryland Coastal Bays Program, with funds provided by US Wind, hired Larned to serve as coastal bird habitat coordinator. They also enlarged the platform, and as a result 155 pairs of common terns used the manmade island this year.

Gov. Larry Hogan had the chance to see the project in early summer.

“This June I had the great pleasure to ride out with the partners to view this island from a safe distance, and I applaud the ingenuity behind this important effort,” Hogan said in a news release. “Watching as the birds adopt this island was an incredible experience and offers hope for the future of these species.”

Researchers, who were surprised by how readily the terns took to the raft, discovered it is actually being used by terns from various locations. They identified banded terns from Poplar Island in Maryland, Hampton City in Virginia, and two terns from Argentina. Most of the birds who nested there last summer also returned. The island did not, however, attract any black skimmers, the other species the project was meant to target.

Nevertheless, the project was deemed a significant step toward increasing common tern nesting in the area. 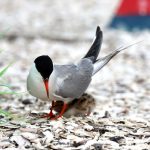 “This summer’s highly successful breeding colony on the habitat raft demonstrates the value of providing emergency critical artificial breeding habitat as a temporary solution to maintaining a breeding population of common terns in the Maryland coastal bays,” said Dave Brinker of DNR Wildlife and Heritage Service, who’s been monitoring colonial nesting waterbird populations since 1985. “But in order to fully recover and sustain populations of terns and skimmers in the coastal bays it is essential that we restore and maintain former sand islands that have been lost to erosion. To achieve that we will need a long-term strategy that allocates locally dredged sand for island restoration.”

The platform is expected to be put out again next spring but Larned, like Brinker, said the long-term goal was to restore the natural sand islands so they could again be used for nesting.

“The plan is to provide this artificial island as an interim solution before all the common terns leave the area,” Larned said. “If there are no suitable nesting sites, they have no reason to stay here.”