OCEAN CITY- The Ocean City Marlin Club’s 14th Heels and Reels Tournament last weekend was once again a huge success with plenty of billfish released along with big fish weighed in several categories.

The Heels and Reels Tournament is largely a billfish release event with points awarded for white and blue marlin, for example. There were also heaviest fish categories for tuna and dolphin, for example. Hundreds of lady anglers participated in the annual event last weekend and there was no shortage of action as they competed for tens of thousands of dollars in prize money.

In the tuna division, it was the crew on the Just One More taking first with a 230-pounder and earned $24,772 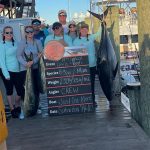 The crew on the Just One More took first place in the heaviest tuna division of the Heels and Reels Tournament last weekend with this 230-pounder worth $24,772 in prize money.
Submitted photo

In the dolphin division, it was the crew on the Following Seas taking first with a 31-pounder worth $19,822. The Just One More crew took second with a 25-pounder worth $8,848, while the Lovin’ Life crew took third with a 24-pounder worth $2,799 in prize money. The Junior Angler Award went to Jillian Lebling with 150 release points worth $500.