OCEAN CITY — A local man with a history of burglary and theft arrests was allegedly at it again last weekend with after getting arrested for two reported commercial burglaries in the downtown area.

Around 12:25 a.m. last Sunday, Ocean City Police Department (OCPD) officers responded to a downtown Boardwalk bar for a reported burglary. The investigation revealed around 10:30 p.m. on Saturday, a male suspected entered a restricted employee-only area of the establishment and stole a large amount of currency from a safe.

OCPD officers were able to view video surveillance footage from that time frame and observed a male suspect later identified as Chad Cirigliano, 43, of Ocean City, walk into the restricted employee-only area in the basement of the building. OCPD officers determined Cirigliano had forced entry into an office within the basement of the establishment and stole cash before exiting the building through an internally-locked rear door.

During the evening hours last Sunday, OCPD officers responded to a Boardwalk hotel in the area of 8th Street for a reported burglary. OCPD officers viewed surveillance video from the early morning hours on Sunday when the burglary occurred and observed Cirigliano access a restricted employee-only area through an unlocked door, according to police reports. 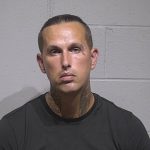 Cirigliano allegedly opened the cash register and stole an undisclosed amount of money before exiting the building. Detectives with the OCPD Criminal Investigation Division obtained a warrant for Cirigliano’s arrest from a District Court Commissioner and he was arrested on Monday.

Cirigliano’s arrest this week continues a pattern of similar incidents for the local man. In July 2019, he was captured on surveillance video taking money from a safe at a nightclub on 17th Street where he worked. In that incident, the business owner noticed he was missing around $3,000 from a safe. After that theft, the business owner purchased a security camera and had it installed in the ceiling area above the safe.

Suspecting the culprit would strike again, the business owner made copies of $900 he put in the safe and waited for the suspect to strike again. Sure enough the suspect, later identified as Cirigliano was captured on surveillance video entering the office and manipulating the safe to steal the money. He was arrested and charged with theft from $100 to under $1,500 for that incident.

In September 2019, Cirigliano was reportedly up to his old tricks again. Worcester County Sheriff’s Deputies, assisted by the Worcester County Bureau of Investigation (WCBI) responded to a garage on Seahawk Road in Berlin for a reported burglary. The garage owner advised detectives a portion of the rear garage door had been broken and tools and other miscellaneous items had been ransacked.

Video surveillance footage reportedly showed a suspect later identified as Cirigliano enter the screened porch area of the garage, reach up and unscrew the lightbulb and then enter the garage using a crowbar before exiting about 10 minutes later. About an hour later, Maryland State Police troopers responded to another reported garage break-in on Route 50 in Berlin and located Cirigliano and took him into custody.

Surveillance video from the Seahawk Road garage break-in linked Cirigliano to that incident. For those garage break-ins, Cirigliano pleaded guilty to second-degree burglary and was sentenced to eight years, all but 18 months of which were suspended.