In recent months, Assateague State Park announced the launch of its newest initiative, “Break the Habit,” which aims to address ongoing issues of human-horse interactions.

In addition to strong messaging that encourages park visitors to keep their distance from the barrier island’s wild horses, the educational campaign aims to retrofit roughly 360 picnic tables with horse-resistant storage bins.

“The initiative is to ‘break the habit’ of not only the horses, but the people too …,” said Meghan Rhode, Assateague State Park assistant park manager. “We’re hoping by giving people an alternate location to put their food, that’s relatively secure from the horses, that they’ll break the habit of feeding the horses and leaving their food and trash out on the site.”

Rhode said “Break the Habit” is a continuation of the efforts being made at Assateague Island National Seashore, which launched its “A Fed Horse is a Dead Horse” campaign in 2017. Seeing the success of the national park’s picnic table storage areas, state park officials decided to follow suit.

“We wanted to make sure it was going to be tried and true before we embarked on this endeavor, and they have seen success with them,” she said. “We had an incident last year where a mother and foal were hit, and that pushed things over the edge and sped things up to the point where we needed to do something more.”

Rhode said “Break the Habit” is one of several educational components at the park aimed at re-habituating the wild horses to their natural diet and teaching visitors the importance of keeping food and trash away from the year-round residents. The state park, for example, also features a Pony Patrol, which educates the public on ways to protect Assateague’s wildlife.

“We already have this educational component,” she said. “This is just taking it one step further.”

To assist in the park’s efforts, Friends of Assateague State Park (FOASP) – a nonprofit organization that supports the park through its fundraising, volunteer and outreach efforts – began promoting the “Break the Habit” campaign, which reminds visitors to keep their distance from the wild horses, to not feed or touch the animals, to dispose of all trash, and to keep all food and pet food properly stored.

The nonprofit is also helping to raise funds for the picnic table storage bins.

“Last fall, Meghan came to Friends of Assateague State Park saying they were going to need help with this …,” said Cheryl Rodriguez, FOASP member and grant writer. “So over the winter we brainstormed ideas.”

With a private donation and a $5,000 grant from the Community Foundation of the Eastern Shore, Rodriguez said maintenance staff and members of the Maryland Conservation Jobs Corps were able to retrofit 85 picnic tables at the state park.

And in July, FOASP learned it would receive $50,000 through a Maryland Heritage Areas Authority (MHAA) grant.

“We’re very grateful to the Community Foundation of the Eastern Shore and the Maryland Heritage Authority Area for awarding us this opportunity,” Rodriguez said.

But officials say more funding is needed to complete the project, as retrofitting each picnic table can cost anywhere from $200 to $500. 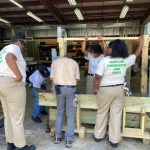 To that end, FOASP will hold a fundraiser at the West Ocean City Chipotle on Monday, Aug. 8, from 4-8 p.m. Patrons must mention the fundraiser to the cashier, or apply the code “G8XCX6C” to their online order, in order for funds to be donated to the cause.

“We will get one-third of the proceeds,” said FOASP Treasurer Roddy Rodriguez.

FOASP officials say they are also raising funds through a Krispy Kreme fundraiser, Thursday Paint Nights, and through the sale of “Horse Herd” stickers, water flasks, tumblers and mugs, which are available for purchase at the ranger station, nature center, or Tie Dye Tuesday.

Donations can also be mailed to FOASP at 7307 Stephen Decatur Highway, Berlin, MD 21811.

“We’re working on a three-phase process,” Rhode added. “We’re hoping to complete the tables over the next five years or so. That will all depend on funding, time and staff availability.”

Since its creation in 2000, FOASP has grown to include nearly 150 members from states across the country.

To date, the nonprofit has supported the state park by publishing newsletters, writing grants, implementing a bike safety program for children under the age of 16, purchasing equipment, and advocating for public lands, to name a few efforts.

“We support the park in different ways,” said Roddy Rodriguez, “mainly through financing, but also through volunteer actions.”