BERLIN– A quick breeze through Berlin turned into a two-night stay as the town’s charm caught the attention of a man walking across America.

Isaiah Glen Shields, 28, is nearing the end of a more than year-long walk across the country. Though he expected to pass quickly through Berlin, the generosity of local residents and the appeal of a vibrant small town prompted him to spend a little time exploring.

“It was beautiful,” he said. “They didn’t get the ‘America’s Coolest Small Town’ moniker for nothing.”

Shields is walking from the westernmost point of the continental United States to the easternmost point—Lubec, Maine. The journey that began May 13, 2021, has taken him across the country, as he’s visited Utah, Idaho, Oregon, Washington, Montana, Wyoming, Colorado, Kansas, Oklahoma, Texas, Louisiana, Mississippi, Alabama, Florida, Georgia, South Carolina, Virginia and Maryland. He’s walked more than 7,100 miles on what he refers to as #WalkAmerica. Why?

“That’s a simple question with a complex answer,” he told one woman who stopped him as he walked out of Berlin.

Essentially, Shields simply wanted to. He has a sense of adventure and an interest in people that pushed him to realize a life sitting still wasn’t for him.

“It’s been a really positive experience,” he said.

“It’s hard to anticipate what any large-scale project is going to entail,” he said. “I wanted to educate myself in a very real way.”

Not only did he want to meet people from all walks of life, he wanted the challenge of overcoming unexpected obstacles. He likes making last minute decisions on which routes to take and how long he’ll spend in a place. He enjoys the uncertainty of stumbling upon places rather than knowing what’s coming. Shields believes it’s all part of understanding what’s really out there and the hidden beauty of the world.

“I’ve been walking continuously,” he said. “It’s a pretty grueling task. That’s what I wanted—the difficulty, the uncertainty, the struggle. I wanted to analyze what I was really doing with my life.”

Shields, who pushes a cart with his gear, typically sleeps in a tent but accepts invitations to stay with people if they come at the end of the day. He spent a night at Libelle Homestead outside Berlin and another night at the Atlantic Hotel thanks to the generosity of local residents. The night at the hotel inspired him to spend some time checking out the town. He got ice cream at Island Creamery, toured the Mermaid Museum and strolled past historic homes.

After seeing small towns plagued by drugs and others struggling to stay viable in the modern age, Shields was pleasantly surprised by what he found in Berlin. He praised the new ping pong tables on William Street, which he noticed were right in front of the town’s power plant.

“They took something that would often be dead space and turned it into a place people could gather,” he said. 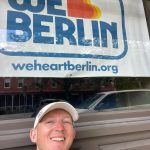 Folks in Berlin—the woman who bought him dinner, the group that invited him to breakfast, and even the dentist’s office that cleaned his teeth—were thrilled to share their hospitality with Shields.

“It was a pleasure to meet Isaiah on his long journey across America,” said Allison Early, an administrative assistant for the town. “He was very friendly and appreciative of our welcoming and generous community. I am so glad he was able to stop and enjoy our town for a couple days because it’s normally something he doesn’t do.”

Shields, who departed Berlin Tuesday morning, said he was considering a visit to Ocean City as he continued north. While going is slow, particularly when he gets stopped every few minutes by someone asking about his journey or sharing how it’s inspired them, Shields sounded nostalgic as he acknowledged that the walk was winding down. While the end is in sight, Shields isn’t ready to abandon his sense of adventure. He’s not sure what he’ll do next but plans to keep moving.