For the first time, the Town of Berlin has among its employees two 15-year-olds. The teens are filling summer help positions that last year failed to attract any applicants.

“It kind of happened on its own but it’s really worked out well,” Mayor Zack Tyndall said.

According to Jimmy Charles, the town’s public works director, the summer help positions he uses to supplement his department’s staff didn’t attract any applicants last year. When the advertisement was put out this year, 15-year-old Berlin resident Dalton Henderson put in an application. After talking to Tyndall and town administration and reviewing potential duties, Charles decided to offer the local teenager the job.

Henderson took the position eagerly and even brought the town another potential applicant in friend and fellow 15-year-old James Uebel. They now both work for public works Monday through Friday. Early risers will see the boys, who will both be 10th graders at Stephen Decatur High School in the fall, biking to work in their bright yellow public works shirts most mornings.

Charles said the teenagers have been tasked with watering plants throughout town, painting curbs and hydrants, cleaning sidewalks and picking up litter.

“It gives them on-job training, giving them skills they maybe didn’t have before,” he said. 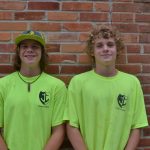 Dalton Henderson and James Uebel are pictured on the job this week.

“They’re working on projects that we needed last year,” Tyndall said. “Jimmy’s department has taken on a lot more responsibility and the staffing levels have remained pretty much unchanged, so they have that additional workload.”

He added that he hoped the boys would return for summer jobs next year but that if they didn’t, the town was certainly open to working with other teenagers.

“The way the job market is right this moment, we’re struggling to bring in part-time staff,” he said. “Last year we couldn’t bring anybody in. This year I don’t think we would have been successful without James and Dalton.”