Arbin, who climbed a lifeguard stand and signaled “We are up at 10:00,” just as he did 50 years ago on July 17, was celebrated by state and local officials at a ceremony on the Inlet beach. They applauded his dedication to keeping the beaches safe as well as his commitment to the community.

“The job is just not a 9-5 job,” Del. Wayne Hartman said. “You never know when the call’s going to come for a beach rescue and you’re always there, you always have the troops there, and the whole town has a huge debt of gratitude to you for that.”

Arbin, an educator for Charles County Public Schools, passed the test to join the Ocean City Beach Patrol July 16, 1973, and was in the stand the next day. He was appointed acting captain of the Beach Patrol in 1996 and was officially appointed captain in 1997. He follows in the footsteps of Robert Craig, who served 52 years on the Beach Patrol, and George Schoepf, who headed the organization for a decade until he died after a battle with cancer.

The resort scheduled Sunday’s ceremony to coincide with Arbin’s first day on the job half a century ago. Hartman and Sen. Mary Beth Carozza both presented citations to Arbin recognizing his five decades of service to the Ocean City Beach Patrol. Carozza said the public safety provided by Arbin day in and day out year after year was incredible.

“Think about the domino effect of all those interactions with families, all of those rescues,” she said.

“We talk about public safety,” Meehan said. “It’s our number one priority. Beach Patrol plays an important role in that.”

Tom Perlozzo, Ocean City’s director of tourism and business development, said that it was good to see Arbin and so many of his longtime employees still devoted to the Beach Patrol. He added that Arbin was a positive leader.

“The seed he’s planted today will be the harvest you’ll see in the future.,” Perlozzo said. 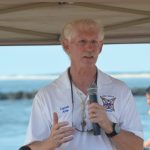 Arbin speaks after being recognized by state and local officials for 50 years of service.

“It’s not easy to manage people,” Theobald said. “It’s twice as hard when you have to manage a new crop of young adults every season coming in here, putting them in quick shape to be able to be out here on this beach.”

Jim Mathias recounted working with Arbin during his time as an elected official in Ocean City. He noted that even when Arbin wasn’t on the beach, he worked in education, inspiring society’s future generations. He applauded Arbin’s dedication to the Beach Patrol.

For his part, Arbin said he was glad that speakers had praised not just him but the Beach Patrol as a whole as well.

“The Beach Patrol is an incredible organization not because of me but because of the we,” he said.

Arbin also thanked his family for their support during his decades with the Beach Patrol.

“My sacrifice was nothing compared to the sacrifice they made,” he said.