BERLIN – With the help of grant funding and community support, a local church is hoping to restore its 110-year-old stained glass windows.

Stevenson United Methodist’s Restore the Light Committee has launched a campaign to restore more than 34 stained glass windows at the church. Now, with a grant from the Humphreys Foundation, church members are hoping to raise the remaining funds to preserve a piece of history.

“We are excited and want to preserve the building for the next generation,” said Beth Sise, chair of the church’s Restore the Light Committee.

Efforts to restore the building’s stained glass windows — installed in 1912, when the granite church was built — began in earnest last fall, Sise said, when an assessment revealed roughly $211,000 of work was needed to address the glass panes and acrylic covers, many of which had been damaged by the sun.

“It’s mainly the east and south side where the sun is prominent … It’s actually caused the most damage,” she said. “We had a survey and assessment done in October and the price took us aback. It’s a daunting task, so once we got our thoughts together, we pursued the grant to make it possible.”

In April, Restore the Light Committee members submitted an application to the Humphreys Foundation seeking a $100,000 grant to assist in restoration efforts. And in late June, the church learned it had received $50,000, with an opportunity to receive $50,000 more as a match. 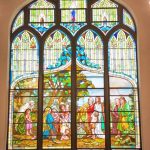 “If we can raise $50,000, the Humphreys Foundation will match it, so there is an incentive there,” she said. “Ultimately, we have the potential to receive $100,000. We are completely humbled and grateful by such a generous gift. It’s a true blessing.”

To work toward the matching grant, Sise says the church will now seek the support of congregation members and the community.

On June 24, for example, the church held a hymn sing and BBQ dinner to benefit restoration efforts. Sise noted the church is also looking into other grant opportunities, mailing campaigns and more.

“The people that gave money to install the 1910 windows were established businessmen in the community …,” she added. “So we’re also looking to see if their family members would support the windows their ancestors helped install 110 years ago.”

Sise said the process of restoring the windows is highly involved and requires the expertise of professionals. She noted that 14 of the windows will be removed and taken to Associated Crafts & Willet Hauser Stained Glass Studio in Minnesota, where they will be disassembled, cleaned and repaired. The remaining windows will stay in place as they are repaired and the trim is repainted.

“New acrylic covers on the exterior will then go in to protect the windows,” she said.

Through the pandemic, the stained glass windows served as an inspiration to the community, as they were illuminated through the night to lift up motorists and pedestrians passing by.

Sise said those interested in supporting the church’s window restoration efforts can donate through the Stevenson United Methodist Church website, stevensonchurch.org/give. Checks, with “Restore the Light” written in the memo line, can also be sent to 123 N. Main Street, Berlin, Md. 21811.

“We appreciate any community support,” she said, “because it’s going to take the whole community to raise this money.”