BERLIN– Local girls showcased their flying skills with a “Drone Olympics” competition to wrap up a school program.

The Fly Like a Girl drone program, offered as an after-school academy at Showell Elementary School, taught girls in third and fourth grade how to pilot drones. Students showed off the skills they’d learned through the after-school sessions with a “Drone Olympics” in June.

“I believe that any opportunity to encourage girls to pursue careers in career and technology education, especially STEM, is critically important to the future of our community,” said Dr. Jon Andes, a school board member who attended the Saturday morning program.

The Fly Like a Girl program was proposed by Valerie Zienty, a Worcester Technical High School pre-engineering teacher, last year. Thanks to a grant from the Maryland State Department of Education, the school system was able to purchase the drones and equipment necessary to launch the after-school program in the fall. Zienty went on to teach three, eight-week sessions during the school year.

“We learned about forces of flight, how to operate drones, dove into imaging and videography a little bit, coded drones to perform tasks and avoid obstacles, and had guest speakers from MARKS RC club,” Zienty said. 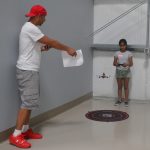 A Showell Elementary School student attempts to land her drone on a target.

Zienty promised her more than 30 students that she’d set up a day of “Drone Olympics” so they could test their navigational skills and teamwork. The event, held at a hangar at the airport in Salisbury, attracted students and dozens of onlookers. Girls took turns navigating 10 courses that involved various tasks, which ranged from knocking ping pong balls off pipes to reaching certain targets.

Zienty hopes the Fly Like a Girl program, and the culminating drone games, will inspire an interest in technology among young girls. She said research has shown that by age 11, girls start to lose interest in STEM (Science, Technology, Engineering, Math) subjects and by 15, they have a hard time envisioning themselves in STEM fields.

“I just wanted them to know and feel that they can do anything,” she said. “My hope is that Fly Like a Girl academy taught them that programming is logical and not as intimidating as it sounds, that teamwork and communication is important to successful completion of tasks, that drones are omnipresent, and that science of flight is interesting and fun.”