BERLIN– The town’s new short-term rental ordinance will go into effect this week despite some requests for a delay.

While owners of short-term rental properties estimated they’d lose 80-100 bookings if the town’s new regulations went into effect July 1, the council nevertheless decided to stick to the scheduled date this week. There was no interest in a motion to extend the implementation date.

“We’re prepared to move forward with the effective date of July 1 if that’s what this body decides, but we wanted to bring this volume—I mean 80 to 100, and that’s probably an underreported number—we felt that it was due diligence to bring that before you guys,” Mayor Zack Tyndall said.

In March, after years of discussion, elected officials in Berlin voted 3-2 to approve an ordinance setting up short-term rental regulations for the town. Though officials initially discussed a requirement to allow short-term rentals in the R-1 and R-2 districts only if the home was the owner’s primary residence per state records, the ordinance presented did not include that provision. Mayor Zack Tyndall acknowledged he’d removed it after hearing concern about it. Dozens of residents in attendance for the March public hearing, however, said they felt it was necessary to protect Berlin’s neighborhoods. In the end, the council’s approval of the ordinance came after it was amended to work the owner occupancy requirement back in.

Planning Director Dave Engelhart told officials this week that he’d been contacted by several property owners with short-term rentals in the months since. He believes there are about 15 currently operating in town.

“I’ve been contacted more recently from some of the owners, they want to know how they’re going to dispose of their property,” he said.

Engelhart said the property owners contacting him has short-term rentals in the R-1 and R-2 districts. They’re trying to figure out whether they should sell their properties or use them as long-term rentals that are permitted in those districts.

“This is why they’re asking for a delay in the implementation of the ordinance,” he said.

Engelhart recommended the effective date be extended to Jan. 1 so that owners of short-term rental properties could finish the summer.

“When the weather’s good we have people visiting us all the time,” he said. “We are as much of a tourist attraction as Ocean City is so we ride the same season they do.”

Engelhart read an email from Jacqueline Clemmer, a Silver Spring resident who with her husband owns a property in Berlin that is used as a short-term rental. She wrote that by renting it out on a short-term basis they were able to retain ownership of the home so that one day they might be able to retire there.

“As the owner of a property who has been paying taxes and contributing to the town’s economic growth by patronizing local contractors, restaurants and businesses for decades I am asking that you reconsider or amend this ordinance to grandfather out those of us who are in this situation by allowing us to continue to operate our rentals at least for the remainder of 2022, if not longer,” Clemmer wrote. “Having this happen in the middle of the vacation season made for unexpected changes to the 2022 budget we already had planned for income, spending and taxes.”

Engelhart said similar sentiments had been expressed by other property owners. In all he was contracted by 10 property owners. He reported that one owner said 47 reservations would need to be canceled through the end of October. Collectively, Engelhart said owners estimated the loss of bookings at 80 to 100.

“Some were reluctant to tell me, I think they thought that was going to send me out on an enforcement run,” he said. “I think it’s probably a lot higher number than that. It’s high season for vacation rentals, not just in Berlin but all around the area.” 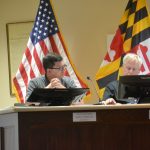 A motion by Councilman Jack Orris to extend implementation of the new regulations failed to get a second.

Tyndall said implementing the regulations in July could hurt people who had already taken off work. Councilman Jack Orris said he felt January was a bit far to extend implementation but said he was willing to consider a date after Labor Day.

“I think the basis for the January 1 date was the wind down of the season,” Tyndall said.

Councilwoman Shaneka Nichols said that if the council delayed now the date would just keep getting extended. She noted officials had talked about short-term rental regulations for years before they were approved in March.

“Every day there’s a different scenario,” she said. “’Hey guess what my son is 18 now so my second house is going to become their primary residence.’ Stop playing games. The ordinance is here, it’s in place. That’s my take on it.”

Councilman Jay Knerr asked Engelhart if the town was prepared to have the ordinance become effective July 1.

A motion by Orris to extend the effective date of the ordinance to Sept. 6 failed with no second. No other motions were made so the ordinance is set to go into effect July 1.