(Editor’s Note: The following is a series on the men and women who have spent their summers protecting all those who came to Ocean City for fun and safe vacation.)

OCEAN CITY — Rick Krause is not your average guard. Most people who try out for the Ocean City Beach 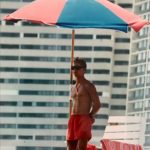 Patrol have been told to do so by a friend or a teammate from school. On a few occasions, the word about the beach adventures and the ocean rescues comes from an older sibling. Rick’s story began very differently.

“I originally tried out because my mother saw a lifeguard stand at the Convention Center in OC,” he recalled.

From that chance observation by his mom, Rick took the journey from Joppatowne to the beach. It was 1993 and Rick found himself taking the beach patrol test “on a brisk day in April. As I recall, the water was 58 degrees.” He was just 17 years old when he made his way to the stand, just like the one his mother had seen, and began his life guarding. Sitting in the northern area of Ocean City, under the watchful eye of his mentor Wes Smith, Rick quickly learned the demands and the rewards of the job. That first summer, Rick had 26 rescues and he was hooked.

“The OCBP is the most fun and most fulfilling job,” he said. “The people here are a family. It’s a job where you directly impact hundreds of people every day. This is a true calling.”

It was a great summer and Rick would return for one more season of guarding in 1994. Like many members of the beach patrol, the real world was also calling, and big decisions had to be made. For Rick, it was the commitment he’d made to joining the service when he turned 18. Following that second summer season, Rick left the OCBP for the Army. Normally, that would be the end of the story. But Rick is not your average guard.

Five years later, he returned. It was the summer of 2000 and Rick had a Military Police career behind him. He took the stand downtown to watch over the often treacherous surf approaching the inlet. It was an intense season.

“My most memorable day was when we closed the ocean until about 1400 (2 p.m.) on a Sunday. We later called it ‘Big Sunday,’” he said. “I recall having 10 or 12 rescues in about a 30-minute span. One of the rescues was a family of four. The father appeared to be freaking out and the rest of the family was busy trying to stay above water. With a lot of effort, I was able to get them in, but it took 10 minutes and we probably drifted eight streets due to the Nor’easter.”

Rick guarded with the beach patrol for two seasons (part time for the summer of 2001) before he headed back inland. He would serve with the National Guard and then serve as a police officer in Bel Air. And again, for most guards, that would be the end of the story.

But Rick is not your average guard.

“Then after 18 years away, I came back to the OCBP. I mentored two young men who went on to join the beach patrol. That triggered my return to guarding,” he said. “I returned in the summer of 2019 and have been guarding again to this day.”

Rick is married and still works with the police in Bel Air. He is known to his fans and followers online as “Fit Rick” and can currently be seen keeping beachgoers safe in the northern reaches of Ocean City.