BERLIN– A local tradition is now a permanent part of the Germantown School Community Heritage Center thanks to a donation from a Berlin resident.

Lifelong Berlin resident William Whaley on Saturday donated three cars for the children’s train ride that’s such a popular part of community events. Whaley, a retiree, makes the cars in his free time and wanted to ensure the historic school had its own set.

“The kids love it,” said Barbara Purnell, president of the Germantown School Community Heritage Center. “It’s one of the highlights of our summer kickoff every year. We’re so grateful.” 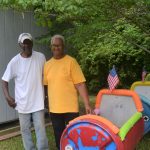 On Saturday, the Germantown School once again hosted its annual summer kickoff for local kids. As always, Whaley’s original train—pulled by a lawnmower—was there to provide rides for children in attendance. While the original train cars are decades old and made of metal, in recent years Whaley has found cheaper and even safer ways to construct them. The set he donated to the school is made of plastic rain barrels on their sides, attached to hand carts, with seats cut into the barrels. Pool noodles line the cut edges of the barrels.

“I thought you could have kids decorate the sides of the barrels,” Whaley told Purnell as he made the donation Saturday.

After providing additional advice on how to replace the pool noodles if necessary and where to find replacement wheels, Whaley said the idea for the train came from a visit to Pennsylvania more than 20 years ago. He saw a similar train there and decided to see if he could make one for Berlin kids. The initial attempt was a success and has been a staple at events like the summer kickoff and the Berlin Police Department’s National Night Out event for years.

“I like to do it,” he said, adding that he’d wanted to make a set for the school so they’d always have it for their community events.

Whaley, who retired after 35 years at Casual Designs, is also known locally for his dune buggy, a regular entry in the Berlin Memorial Day parade.