Tindley, the gospel music icon born in Berlin, is being recognized with a mural on the side of the Bruder Hill building. Artist Jay Coleman is on site this week painting the expanse of what was once empty wall.

“I hope that it does what it was intended to do—educate people about this individual and bring some pride to Berlin,” Coleman said.

Tindley, whose “I’ll Overcome Someday” is considered the basis for the U.S. civil rights anthem “We Shall Overcome,” was born in Berlin in the 1850s. In an effort to celebrate Tindley and his connection to the town, officials applied for a grant last year to have Coleman paint a mural of him in the downtown Berlin Arts and Entertainment District. While Beach to Bay Heritage Area was successful in getting the grant, it took several months of working with citizens and members of the Berlin Historic District Commission to settle on an appropriate building and suitable design for the mural. Just last month, the historic district commission approved the design now being painted for the side of the Bruder Hill building on Commerce Street.

“Everyone got their say,” said Lisa Challenger, executive director of Beach to Bay Heritage Area. “It was a process that needed to happen so everyone could have buy in on this and feel a part of it.”

Coleman, a Washington D.C. artist, started work on the mural Monday. The first step was getting the outlines of the design on the wall.

In order to move the project along a little faster, Coleman said he did project the design onto the wall late Monday night to complete the outline. Tuesday, despite rain, he was on the electric lift with both spray paint and a paint brush, shading and filling out the design.

“I wish it had a little more color but I’m going to try to make it as vibrant as I can with shades of gray,” he said.

Coleman said the mural will be finished by Saturday, when it will serve as the centerpiece for a community Juneteenth celebration.

Coleman, who initially worked in special education and has only recently turned to art fulltime, is thrilled to have been chosen to paint the Tindley mural, particularly in a town like Berlin.

“Whenever I have the opportunity to do something historical I jump on it,” he said. “I also think it has a greater impact in a smaller town.”

Coleman said that African art is traditionally functional, something he believes this will be in that it will share a piece of local history. He worries that in today’s society, people focus too much on the moment, thinking only about their latest Instagram post.

“This is functional in that it’s an educational piece,” he said. “So many people today are ahistorical.” 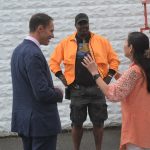 Coleman said Tindley should be remembered in his hometown.

“It’s huge for the town,” he said. “He didn’t really get a lot of his pub until he moved to Philadelphia but this is where it started so it needs to be commemorated.”

Coleman said working on public art was a joy to him.

“You don’t see the fruits of your labor when you do public art,” he said. “It’s not like it’s in a gallery and people come to your show and look at it and say ‘oh this is great.’ You never know the impact that you’re going to have. And you don’t know how long it’s going to last, somebody may come down the street that I’ve never met, that I never will meet, that’s inspired by this, either the content or the artwork.”

Ivy Wells, Berlin’s economic and community development director, said the project would be part of a larger African American history trail throughout the Lower Shore. She said the mural would also add to Berlin’s growing array of public art.

“This makes Berlin even cooler,” she said, adding that the town was making great strides in adding public art. “This is the third mural within the last year going up in our downtown,” she said.