With the Route 90 bridge in the background, Hogan announced Monday that $15 million in funding would advance the state’s “Reach the Beach” plan to improve safety, access and congestion relief projects on Route 90. The project has been a local priority for years.

“Today, at my direction, the state is investing $15 million to accelerate forward the entire planning phase and to move the Route 90 improvements ahead into the design phase which is an important and critical step closer to making this a shovel-ready project,” Hogan said.

Last summer, Hogan announced that the state’s Consolidated Transportation Plan would include $850,000 for Route 90 planning. The 12-mile corridor between Route 50 and Coastal Highway carries about 33,000 vehicles a day on weekends in the summer and has long been in need of improvements.

This week, just days after announcing the launch of a $28 million Bay Crossing study, Hogan said the state would provide $15 million in funding to finish Route 90 planning.

“Today we’re taking another important step in our ‘Reach the Beach’ plan, addressing one of the top transportation priorities for Ocean City, for Worcester County and for the state of Maryland …,” he said. “Route 90 was originally built to help get beach bound travelers to the rapidly growing parts of northern Ocean City, but it was designed also to be a primary hurricane evacuation route. For many years upgrading Route 90 has been a top priority not only for safety, for access and for the local economy but also for its vital role in emergency response.”

Hogan said the St. Martin River crossing and the Assawoman Bay crossing were built in the 1970s and half a century later were in need of upgrades. The planned improvement study will look at the bridges as well as the entire Route 90 corridor.

“Obviously we will continue to collaborate very closely with Worcester County, with Ocean City, throughout the entire process to ensure the new and improved Route 90 corridor will meet the growing economic needs of the region while also preserving the rural small town atmosphere that residents and visitors alike have come to know and love,” Hogan said.

Sen. Mary Beth Carozza, who was among the officials in attendance for the announcement, praised Hogan’s commitment to Eastern Shore priorities. She noted that the Route 113 improvements in Worcester County had been completed while Hogan was in office. 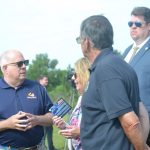 “When we do have a priority project in Worcester County, like the Route 113 widening – that was completed under Governor Hogan’s leadership,” she said. “Then when we did the pivot on the next project, Governor Hogan has made it a priority.”

Worcester County Commissioner Ted Elder said he was thrilled to see safety improvements being planned for one of the county’s key roadways. He pointed out that Route 90 was a vital way in and out of Ocean City.

“It’s great to finally get things moving on this,” he said. “It’s really a safety issue. If anything happens with the bridge on Route 50 and you have an emergency, this is it. The sooner we get it done the better it will be.”

Earlier this month, the Maryland Department of Transportation State Highway Administration announced the start of a “Planning and Environmental Linkages” study for Route 90. The public will have the opportunity to learn about the study, which is expected to evaluate the improvements needed, during a virtual public meeting set for June 21. A link and information regarding the virtual public meeting, which will be held June 21 from 6:30 to 8 p.m., can be found on the agency’s website.