OCEAN CITY – Resort officials this week ratified a three-year collective bargaining agreement with the Fraternal Order of Police (FOP), and agreed to provide a one-time bonus for all full-time town employees in the process.

On Monday, the Mayor and Council officially ratified the collective bargaining agreement with the FOP after weeks of careful negotiations between the two parties, their lawyers and other intermediaries. The contract ratified on Monday and signed by the parties will remain in place for three years through fiscal year 2025. 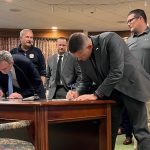 The lengthy document is full of details, but it is essentially an employment contract between the city and its police department. It includes step cost-of-living allowance (COLA) increases that go up by percentage points over the life of the contract. It also includes a $2,500 longevity bonus for tenured employees and a one-time $500 bonus for full-time employees with at least 12 months of service to the town.

The total cost of the three-year contract for the town is around $1.9 million. City Manager Terry McGean outlined some of the highlights of the FOP collective bargaining agreement for the Mayor and Council before it was inked.

“What you have before you is the approval of the FOP contract,” he said. “There are a lot of details, but the highlights include a series of COLA increases, a one-time longevity bonus and a $500 one-time bonus for all officers. This contract is the result of a lot of compromise and a lot of hard work by both sides.” 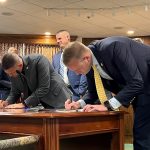 ratified and signed on Monday signaled a message to residents and visitors about the town’s commitment to its police officers.

“It has been 20 years since the town of Ocean City voters provided the FOP the opportunity to bargain collectively and have a contract,” he said. “For the citizens, this allows our officers to go out and do their jobs in this unique resort town. I have a lot of faith in our tenured officers.”

Paddack pointed to a relatively safe and peaceful last weekend as an example of what the Ocean City Police Department (OCPD) and its FOP officers do for the town.

“It was a beautiful weekend with tens of thousands of visitors,” he said. “You guys know what the expectations are. About 20 years ago, I was in your shoes. Go out and protect our town and know that you are being taken care of.”

“It seems like this is an easy process, but it’s not always easy,” he said. “Sometimes, it goes on longer than it needs to, but that was not the case this time.”

“We want to have the best officers in the state and we do,” he said. “They are out there to protect our city. We want them to come here and have successful careers for a long time. I think everyone was able to accomplish their goals in this case.”

The council voted unanimously to ratify the new FOP collective bargaining agreement. With that dispensed with, Council President Matt James suggested the same $500 bonus should be extended to all full-time town employees with at least 12 months of service.

“I would like to entertain a motion to give all of our employees that $500 bonus contribution to show our appreciation for all they do,” he said.

A motion was made to do that by Paddack and seconded by Councilman Lloyd Martin, and the council voted unanimously to extend the $500 bonus to other full-time town employees.